He had just completed his finance degree at West Virginia University, and thanks to the beginning of the Great Recession, Matt Kwasniewski saw little opportunity in his native state.

That’s when Kwasniewski made the move that changed his life forever.

Kwasniewski packed his belongings and ventured to Montana, and not only did he meet his wife, Ashley, there, but he also discovered a vocation he would soon bring home to Randolph County.

“I always knew craft brewing was something that I wanted to get into, and in Montana the beer culture is just awesome. It seemed like everyone there was into home brewing,” the 29-year-old said. “In the town where I was, there were three different places where you could buy home-brewing supplies. That’s how popular it was. 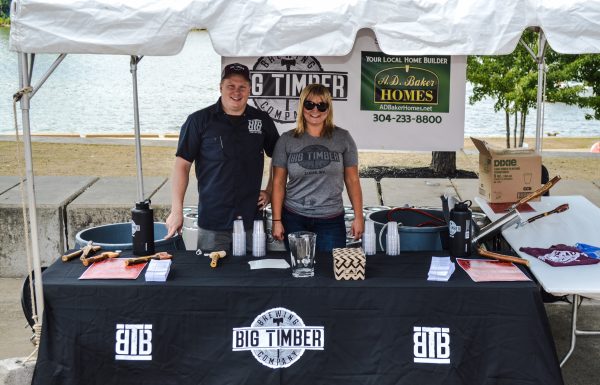 Kwasniewski and Roberts enjoy participating in the many craft brew festivals around the state of West Virginia.

“Home brewing was really something I always wanted to do, and I got into it pretty big, and then I got a job at a small brewery out there called Glacier Brewery,” he continued. “I learned a lot there because the owner, Dave Ayers, was a great mentor. Then I decided to come home and start my own business using everything that I had learned.”

And Ashley, a native of Montana, first said, “I do,” and then she came home with him.

“We decided to move back to Elkins in 2011, and that’s when we started working on the financing. That took a lot longer than I anticipated,” Kwasniewski said. “After two years, we got the financing, found the property, and immediately started the build-out for our taproom.”

And that’s when the Big Timber Brewing Company was born. With partners (he, his wife, good friend Sam Mauzy, and his sister, Amber) in place, the brewery and taproom opened in Elkins in 2013 at 1210 South Davis Ave. The production brewery features a blonde ale, a pale ale, an IPA, and a porter all year, and the summer seasonal brews include a light IPA, an Irish stout, and a bourbon-barrel porter.

“With the release of three new beers this past week we now have nine craft beers that are available at the taproom,” he said. “We also make our homemade root beer that a lot of people seem to enjoy a lot. 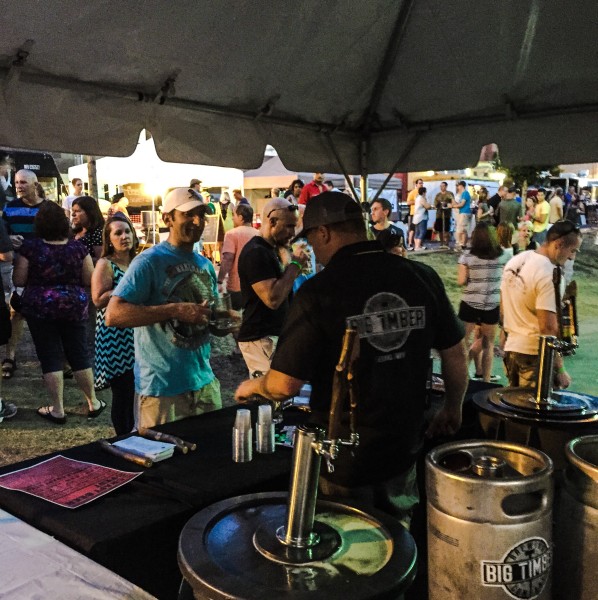 “The business has been very well received in Elkins, and at this time our beers are for sale now at 10 different locations,” Kwasniewski explained. “We have a lot of hometown pride in Elkins just like there is a lot of pride in West Virginia throughout the state.

“And I think people are getting used to the difference between the craft brews and what they have grown used to during their lives. When we have a new customer, they usually start with the blonde ale because they’re not ready for an IPA yet,” he continued. “But then it’s always fun to watch them work up to the IPA.”

“That’s when we have our Old-timers’ Jam and there could be anywhere from three to 20 people playing great music,” he said. “We have a lot of talent in the Elkins area, so we are very lucky that those folks like to come to the brewery and play their music.

“If the weather is nice in Elkins we have a lot of people who come and grab a growler to go because they are grilling out or going camping,” Kwasniewski said. “Now if it’s raining it, seems as if a lot people come inside and socialize.

“Our taproom is well lit, and there’s more of social gathering atmosphere,” he said. “It’s not really a place to come and drink one beer by yourself. You are more than welcome to do that, but it seems as if it’s become a place to come to meet people and mingle, and to talk about whatever they want. It’s an excellent atmosphere.”

Much progress has been made as far as distribution is concerned, and Kwasniewski said his efforts to expand will continue until Big Timber reaches all areas of West Virginia.

“We’re trying to get our products to as many places as we can around the state,” Kwasniewski confirmed. “Right now our products are also in Charleston, Huntington, Clarksburg, Fairmont, Morgantown, and we have a couple of places in Buckhannon, too. 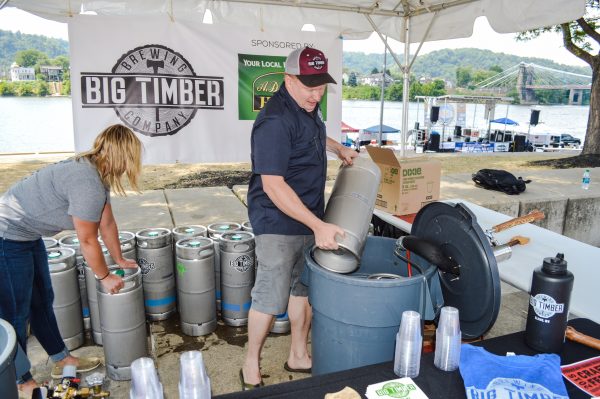 Matt Kwasniewski and Amber Roberts prepare for the annual Mountaineer Brewfest in Wheeling.

“We also have a presence in the Eastern Panhandle and also down in the Princeton/Bluefield area, too,” he continued. “We have a lot of the state covered and we would love to make a push up into the Wheeling area, too, but we keep running out of kegs and always have to order new ones. That’s a good problem to have, I know, but there are a lot of thirsty people here in Wheeling, and we just haven’t been able to get here just yet.

“We will start packaging in cans pretty soon, so I would think our products will be in the Northern Panhandle by the end of this year. I think Wheeling is a great beer-drinking town, and now with the Wheeling Brewing Company I think it’s going to continue to grow. Wheeling has a lot of brewing history, and it seems to me that it’s ready to have that again.”

Kwasniewski and Big Timber employee Amber Roberts participated in the annual Mountaineer Brewfest in Wheeling last weekend, and 90 gallons of five Big Timber craft brews were poured until all but two kegs were emptied.

“We really like to hit all of the festivals around the state or as many as we possibly can,” he added. “Each year more and more people are attending the festivals, and the popularity of craft beers continues to grow in West Virginia.

“And another reason we like to participate in all the festivals is because of all of the great feedback that we receive from people everywhere. There’s really nothing better than watching someone try our products for the first time and then hearing what they have to say about it.” 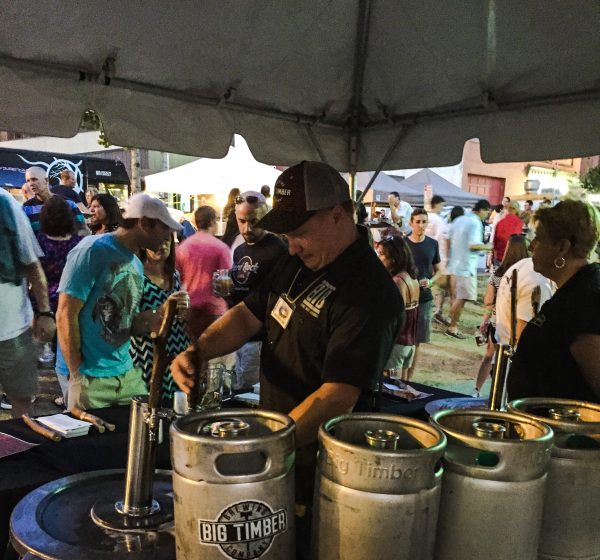 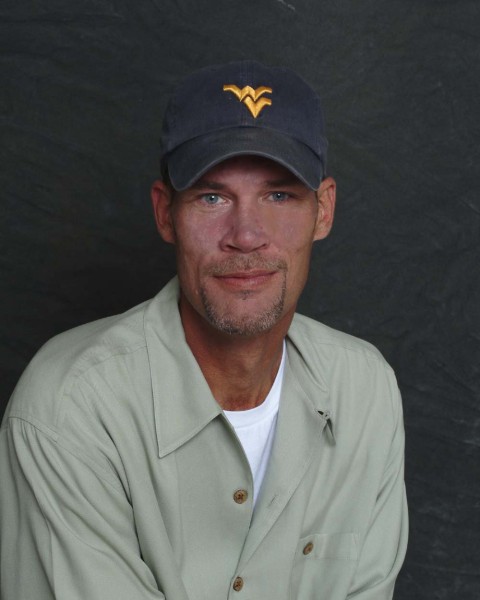 Steve Novotney, Chief Writer at weelunk.com, has been working as a professional journalist for 23 years while working for weekly and daily newspapers, the official publication of the Pittsburgh Pirates, and talk radio stations in Pittsburgh and Wheeling. He took his journalism to the Ohio Valley airwaves in 2004, with the intention to provoke thought and to discuss the issues most important to the region’s population. Novotney consistently uncovers breaking news stories and concentrates on the citizen’s stake in local, state and national government, and he also is the premiere interviewer and feature writer in the Upper Ohio Valley. And he’s providing those abilities for Weelunk. Steve has been married to his wife, Michelle, for more than 20 years, and they have two children, Michael and Amanda.