As the gray clouds of winter began to subside and the ground began to come out of a deep freeze a newly formed ad hoc group emerged under the umbrella of ON TRAC, now Main Street, Design Committee.  The focus was to consider floral embellishment of downtown for the upcoming spring with the idea of continuing decoration of downtown throughout the year.  We are now the Downtown Street Scape Group, open to any resident to join.

From a small number of 3-4 people the concept of involvement of many came to fruition.

The group came to the consensus, with input from the Emma Scott Garden Club, that the tree boxes, in spite of their limitations, should sport flowers of red and white begonias, a hardy flower to grow and survive in the climate and, also, the official flower of Elkins.  With that decision made, downtown merchants or building owners were contacted to determine if they would like to plant the boxes outside of their businesses if soil and flowers were provided.  Many responded with a resounding “yes” while some requested the assistance of volunteers.   The flowers and soil arrived the first of June and volunteers from Main Street and the community, city summer workers, Emma Scott gardeners and merchants and their employees showed up to clean, prepare and plant.   Others received their plants and took on their project around their busy work schedules. The Garden Club also designed and completed the area called the Gateway at the corner of the Frontier building. What a rewarding experience watching the energy and cooperation aimed at making this idea a reality! Then came the lush hanging baskets from Mary’s Greenhouse to complete the floral scape. 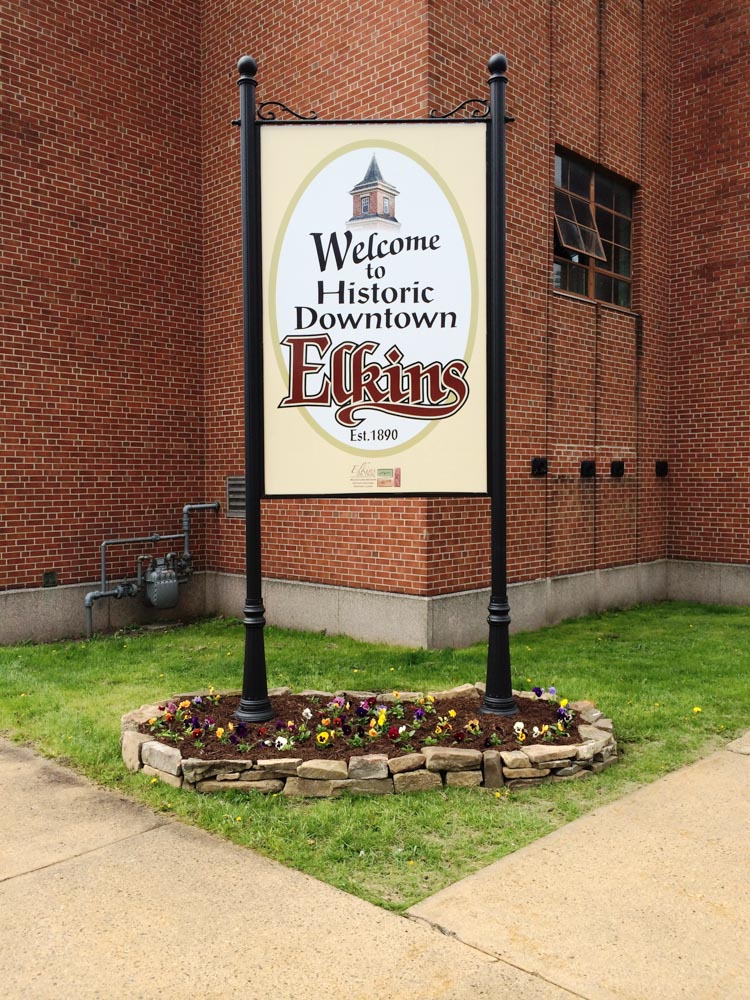 Flowers planted at the Gateway by the Frontier Building in Downtown Elkins.

The collaboration did not stop there.  Gardeners full well know that planting something does not end the process.  City workers took on the task of watering while members of Emma Scott came armed to weed around the new growth as needed.  The next phase of the project was completed by the young men of the shop class of the Mountain School who used their acquired skills to create signs to place on the boxes to give credit to the many who worked to bring life and color to the downtown sidewalk area.

Collaboration with a hearty sprinkle of pride and energy brings a community together.  If anyone would like to help with the conversion of downtown into fall with scarecrows, corn shocks, etc. please contact Maryann Maxwell Durland at 304-636-3896.