On Wednesday night I had intended to re-create my usual list of Top Forest Festival Eats, but I was unable to visit one place in particular; they had sold out and closed for the evening. For the first two years of the top eats they were my first stop, but this year I changed the order and ended up missing out. Back Porch BBQ, across from Lynn’s on Randolph Avenue, is not only a personal but a local favorite. Being unable to include them in my original article, I decided to stop by on Thursday to get to know the people behind the barbecue. 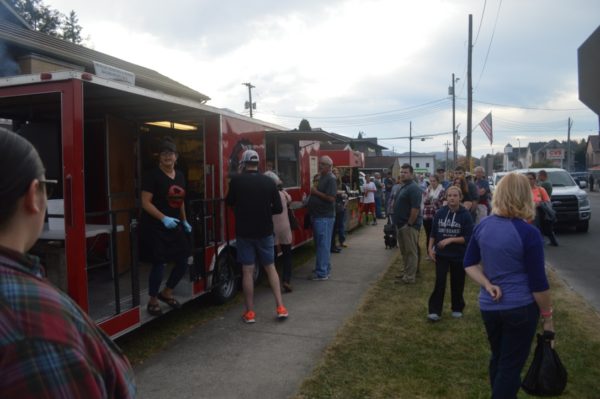 The line extends almost halfway down the block

Natives of Elkins, the Harman family loves to cook and eat. They celebrate everything they do with food. As lovers of food, this all started when Tammy Dolly’s mother said she wanted to have her own concession trailer. According to Tammy, when your mother says something like that “you order a trailer!” And this is exactly what they did. They ordered a trailer, had the Hare family build them a smoker, and in 2013 appeared at their first Forest Festival as Back Porch BBQ. 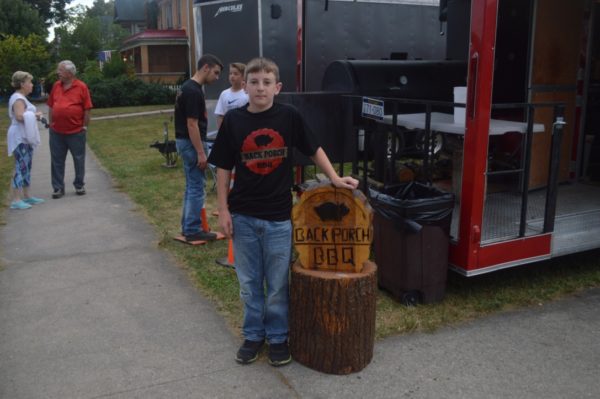 Lukas Harman with the Back Porch wood carving

Their first year they had a goal to sell 3-400 sandwiches total. They were shocked when they had sold that many in just the first day. In doing so, they worked around the clock (even sleeping in yard chairs in their trailer) in order to keep up with the demand and keep the smoker going. By the second year they become better at gauging how much they would need. 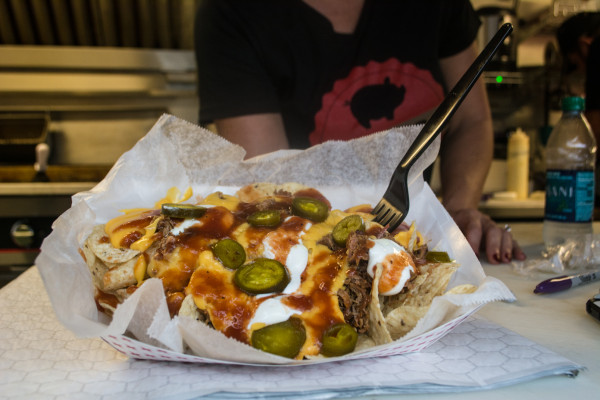 Ever since that first successful year, Back Porch has kept growing and it certainly shows. It is rare to see the stand without a long line waiting for their delicious food. Every year they keep getting better, and on Wednesday night sold out again. Tammy said “you think you have it covered, and it’s never enough…you add more and more…we’re going to keep trying to get better, but we can’t fit anymore people inside of that trailer!” 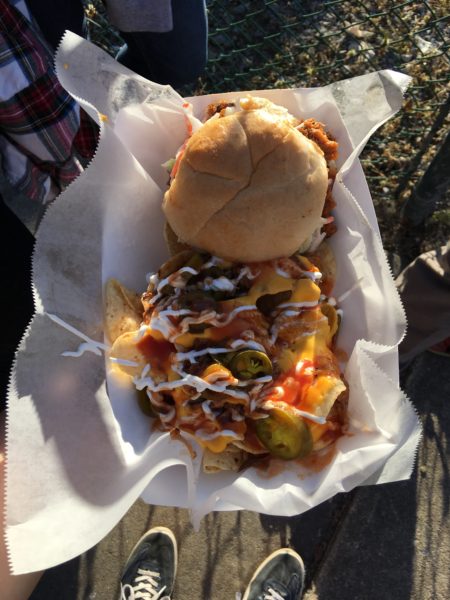 They are going at it the best they can without compromising the quality of the food. Tammy said that “we’re a society of quick food, processed, and frozen… That’s not what we’re about.” Rather than give in and switch to methods that may be quicker, the Harman family continues to do everything by hand. From smoking the meat, trimming the fat from it, pulling all of the pork, cutting the vegetables, making the sauces, and making their potato salad from a family recipe they certainly do it all. They never want to take shortcuts to sell more sandwiches. 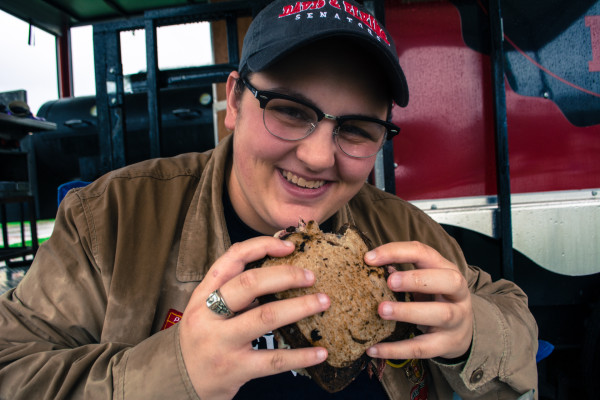 Despite this being the hardest they work all year, Tammy says it is still a good time. This is important to them. She reminisced about her grandparents parking their truck on the same corner that their stand is set up at and her grandmother would fry chicken, make homemade bread, fry potatoes, and they would all gather around the back of the truck to eat together after coronation. The next day, grandmother would cook again and they would meet after the parade to enjoy another meal. She had not thought of that until we sat down for this interview, and said “it’s kind of, almost full circle…it’s kind of funny.” 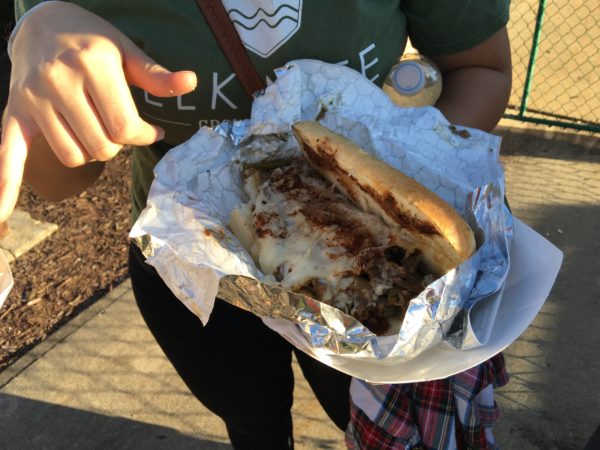 This year they have added mini donuts to their list of menu items. They have been a trial run for expanding and possibly bringing back some old menu items. The main trailer has reached its capacity, but there is potential to expand beyond the trailer. The donuts are the first step, and she thinks they have passed the test and can handle some more expansion. Without being too specific, she hinted at bringing back some foods from their first year including “a really good item…that involved a fryer.” No plans have been made yet, but the potential is there. 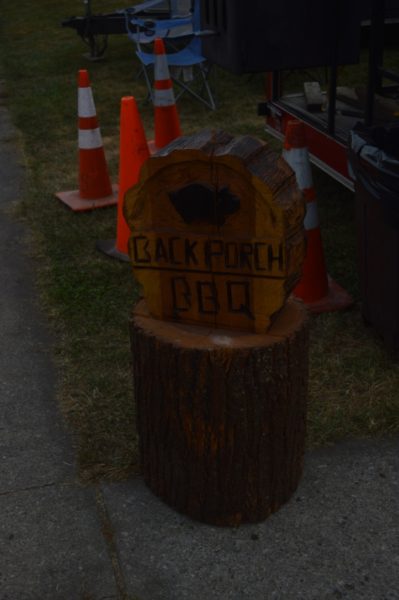 As for the future, Tammy says they have gotten a lot of requests for a restaurant. She went on to say “we enjoy the way it is and enjoy doing it the way it is. They say if it isn’t broke don’t fix it, and it isn’t broken.” So, for the foreseeable future Back Porch will continue their annual appearance at the festival. No brick-and-mortar restaurant is in the immediate plans, but, as they say “never say never.” 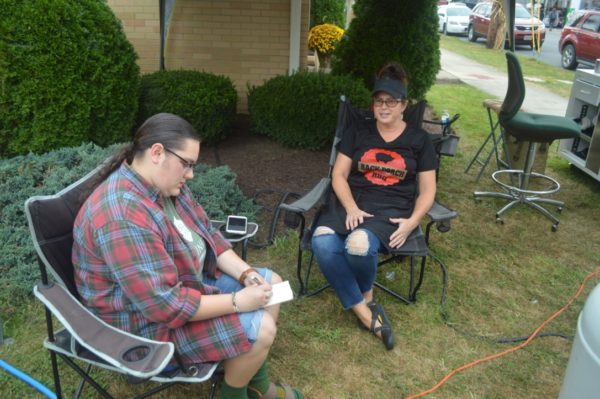 Tammy and I sitting for the interview

For closing remarks, Tammy wants to give a big thank you to all of the locals that “really pump us up and make us feel like rockstars for a week.” The people love their food, and they really love serving them food. She also wants to extend a big thank you to the out-of-town visitors, too. Since they are locals it means a lot to be able to feed their friends, and everyone else as well.

Back Porch BBQ is definitely a stop worth making. Swing by from 11 till approximately 7 for the next couple days to try the food stand Elkins has been raving about and managed to completely empty out on Wednesday night. Their menu includes pulled pork sandwiches, reuben sandwiches, pork barbecue nachos, and more!