On the cusp of fall, with crisp air gently rustling through the vibrant trees, one is often filled with an insatiable wanderlust and desire to take in the short-lived fall colors before they disappear for the long, barren months of winter. After a morning of guiding canopy tours through the changing trees and an afternoon filled with scaling rock climbing routes on a warm and sunny October day, we set out in search of fall colors – fortunately for us, we remembered the Table Rock Trail, which sits on the edge of the Blackwater Canyon not too far from Elkins. The colors grew more vibrant as we neared the trail – we knew instantly that we had made a great decision. 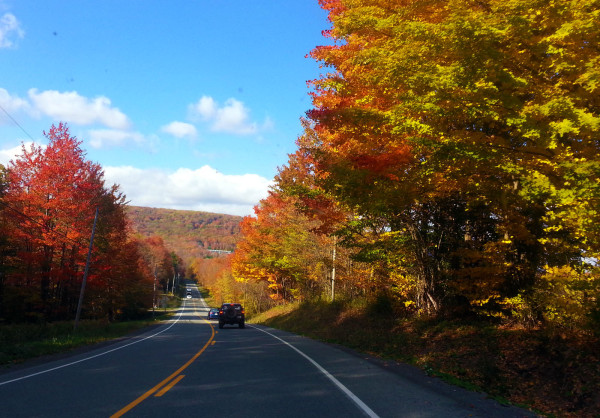 After winding our way up Canaan Mountain, we turned left on to Canaan Loop Road and began the final stretch of the journey to the Table Rock Trail. As we followed the bumpy gravel road through the dark white-pine forests, the red spruce wetlands, and beside the dark, tannin stained stream, many songbirds made their presence known with their loud, sharp melodies; deer and grouse alike fled as our vehicle approached. Soon enough, we arrived at the trailhead and began our journey with hope of making it to the cliff’s edge and back the impending sunset. 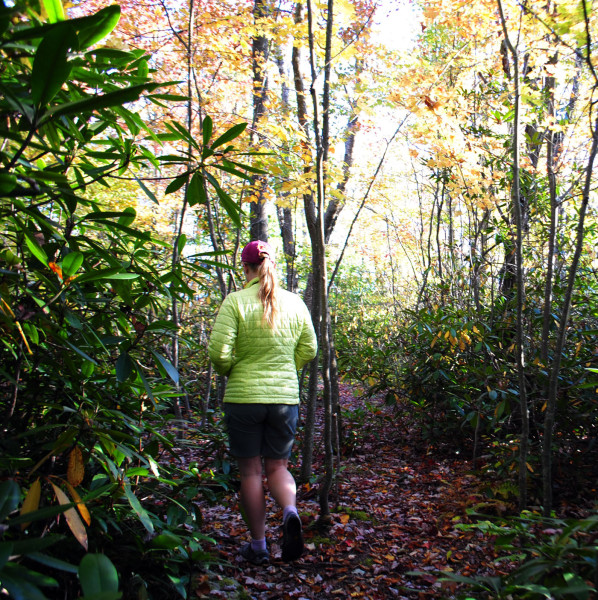 The trail itself winds through a wet, red spruce filled forest and into a drier hardwood forest. Newts, caterpillars, and grouse all joined us on the trail – of course, the few grouse that we encountered announced their presence with the heart-attack inducing helicopter maneuver for which they’re well-known. The smell of rich earth and crisp, freshly  fallen leaves greeted us at every step. As the trail winds its way closer to the cliff’s edge, it gradually opens up to a section of the grand view that hikers are greeted with. As soon as we saw this sliver of the view that awaited us, our hearts soared in excitement for what we had found. 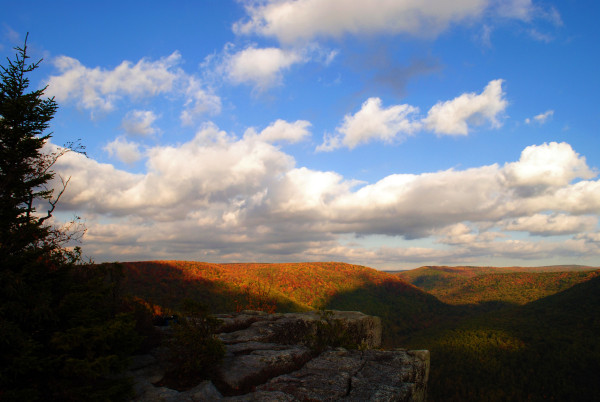 Gorgeous fall colors of the Blackwater Canyon greeted us at every turn, perfectly contrasted by the rough, rugged rock of the cliff’s edge. The soft glow of the golden hour caused the sparkling gold, smooth maroons, and fiery orange leaves to radiate their colors with increased vibrancy. As we were admiring the views, a single howl of a coyote bounced off of the canyon walls and made its way to our alert ears as we wound our way over the rock and through the abundant blueberry bushes. 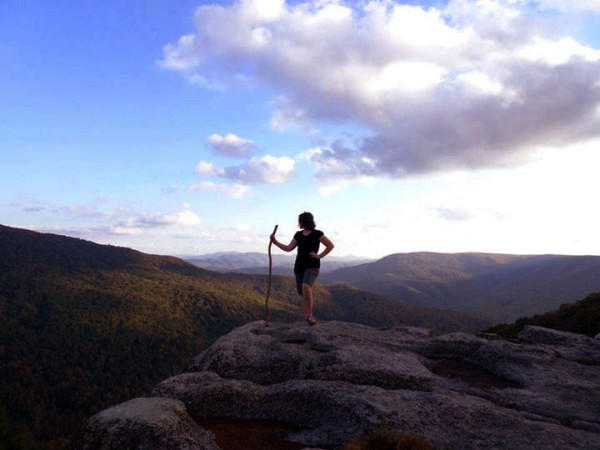 The single howl soon turned into an entire chorus of yips, yells, and howls that resonated from the bottom of the valley. Though we knew they were far away, the hair on the backs of our necks was still standing on end and goosebumps found their way up our arms and legs as we all stopped short at the sound. The howls died down and we continued to meander around the long rock face, more alert than we had been just seconds before. 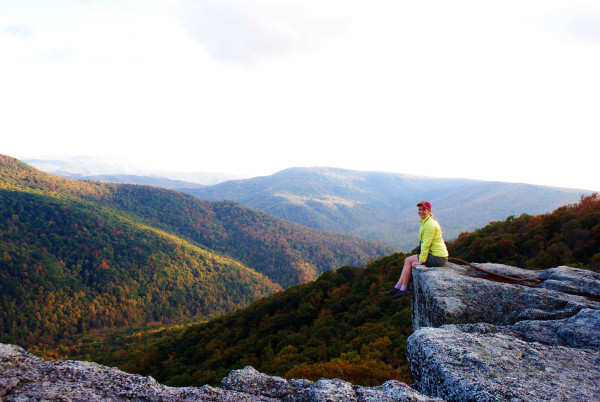 Of course, when one hikes to the edge of a cliff, one must – at least temporarily- test the limits of one’s fear of heights; Sitting on the edge of a rugged rock face with a beautiful array of uneven mountains, vibrant trees, hidden animals, and a raging river set out in front of you while a soft breeze, filled with the familiar scents of fall, gently tousles your hair often stirs up a strange mix of fear, adrenaline, and accomplishment. Such a setting often produces an awestruck silence 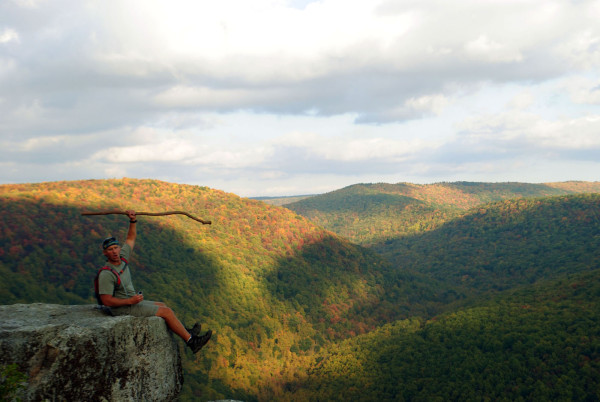 However, a peaceful stillness is not always the case- sometimes, the pure, uninterrupted wilderness of it all wells up inside of the observer until it finds its way out in the form of a loud salute to the surrounding beauty. Taking in the view in front of you isn’t enough; while sitting on the cliff’s edge, the opportunity is wasted if you don’t also take in the view below your feet. 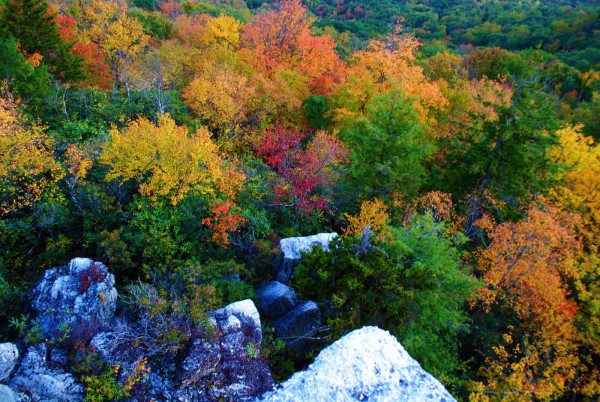 The trees below the rock face were, arguably, the most dynamic and stunning. Mixed between the fall colors grew several evergreens and shrubs; the stark contrast between the boulders, summer greens, and the warm fall colors was increased by the blue shadows cast by the edge of the mountain. 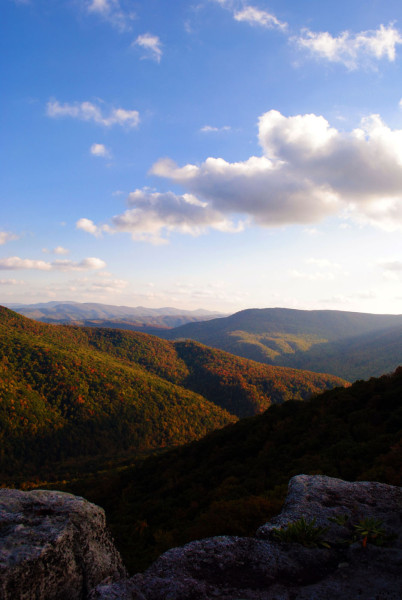 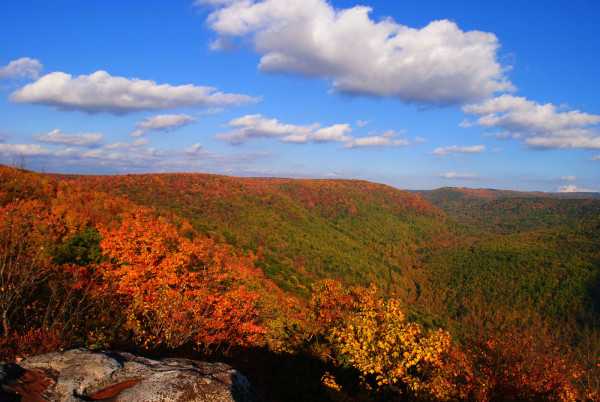 Our minds were still reeling over the magnificent mountain scenery that stretched behind us as we took one last glance back at what we had stumbled upon. The setting sunlight glistened through the golden leaves of the understory trees beside the trail as we hurried back to our vehicle. The temperature began to drop with the sun ans we quickened our pace. Nightfall came quickly as we drove out of Canaan Loop Road and on to Hellbender Burritos for a well-deserved meal at the end of a fantastic, nature-filled day.