The Helvetia Community Fair is a nearly century old tradition that is held yearly during the second full weekend of September as a celebration of agriculture and heritage. According to the fair’s website it is one of the oldest agricultural fairs in West Virginia, and this year it celebrated its 99th anniversary with a delegation from the Swiss Club of Washington, D.C. 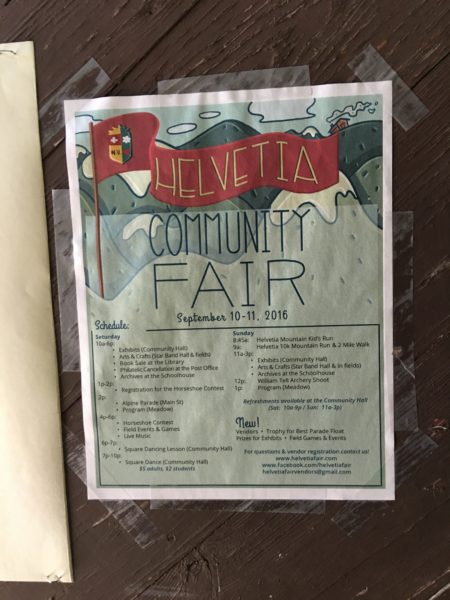 Festivities kicked off on Saturday with day-long events including viewing of the exhibits at the Community Hall, numerous craft vendors were at the Star Band Hall and in the nearby fields, a book sale at the library, the archives at the schoolhouse adjacent to the library were open, and the museum next to the library was also open for visitors. These also continued on Sunday. 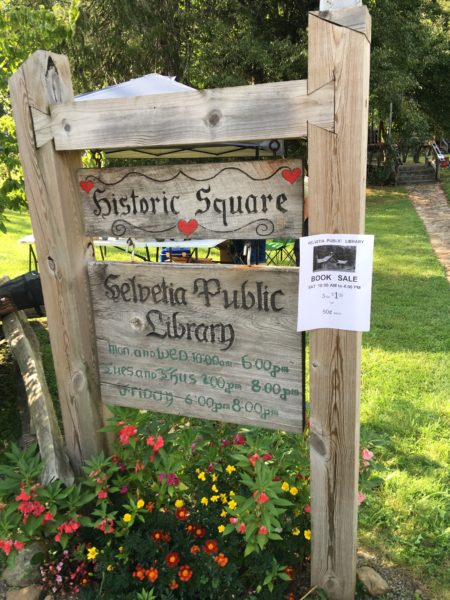 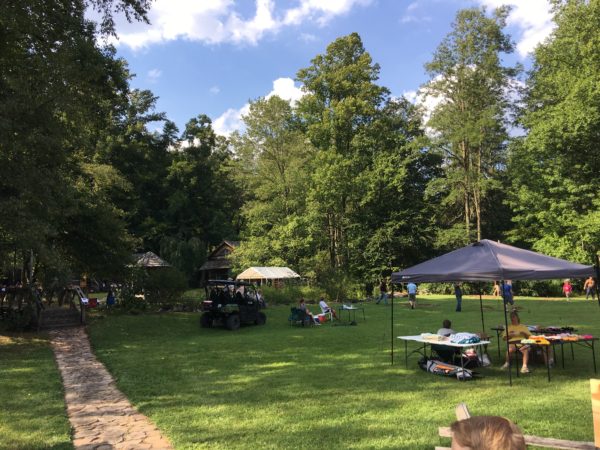 Craft vendors set up in the field near the library

Saturday afternoon the parade kicked off, and immediately following the conclusion of the parade the program in the meadow began with a group singing some traditional Swiss yodels. Here, the Swiss Club joined in at some points and the meadow was filled with the sounds of music. 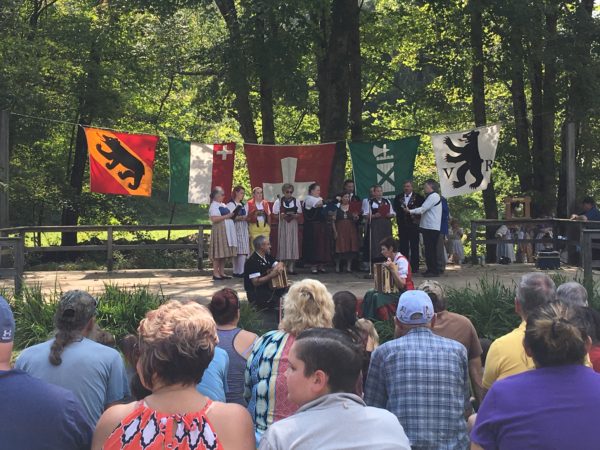 After the yodeling concluded a group of local youth took the stage to perform some Swiss folk dances. The little ones twirled round and round in a performance they had obviously spent much time preparing for. 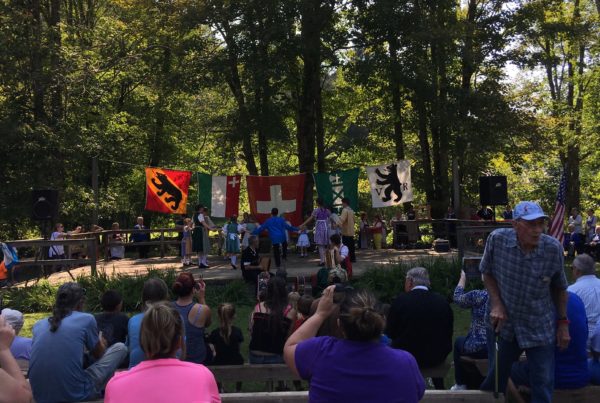 Around this time a member of the Swiss Club, Christian Haudenschild, approached the microphone to thank Helvetia for such a warm welcome and to discuss a program through the Swiss Club that provides college scholarships to Swiss descendants in the Washington, D.C. area. The program also provides the same scholarship to Helvetians, but this year there were no applicants.

After they had exited, the group of performers brought out alpenhorns, two of the members of the D.C. delegation joined in playing another unidentified type of instrument, and two young men from Helvetia alongside another of the D.C. folks practiced the sport of fahnenschwingen (flag throwing). This year was the first I had seen the outdoor program weather had forced it indoors for the past two. As a result, it is also the first time I have seen the alpenhorns played and the flags thrown. 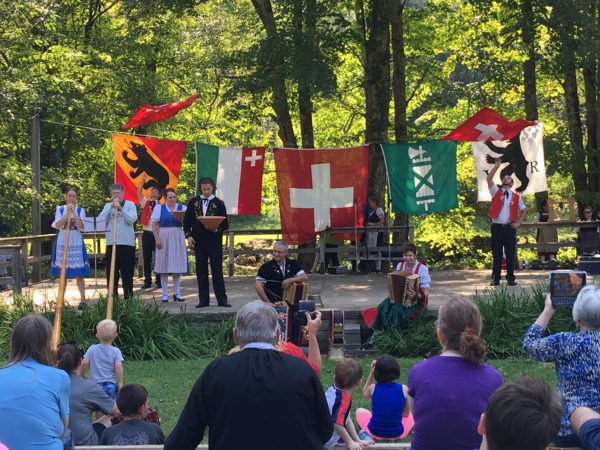 Next, the adult dancers took the stage to show off even more traditional Swiss dances, including the Helvetia Polka. The announcer informed us that two of the couples had only practiced the dances a handful of times, but one could not tell as the performance seemed as flawless as the children’s had. They were joined by members of the Swiss Club in the last dance. 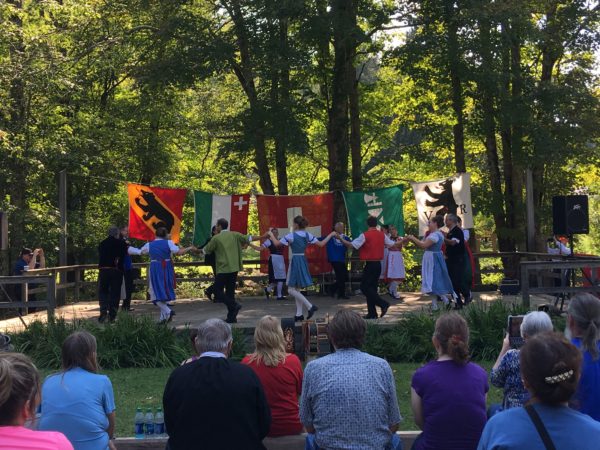 The adults having their go at dancing

Finally, the Swiss Club took the stage one final time to sing/yodel. Unassisted by the microphone, their voices still perfectly resonated throughout the meadow. With that, the program was over for the day and I got the opportunity to speak to a couple members of the D.C. delegation. 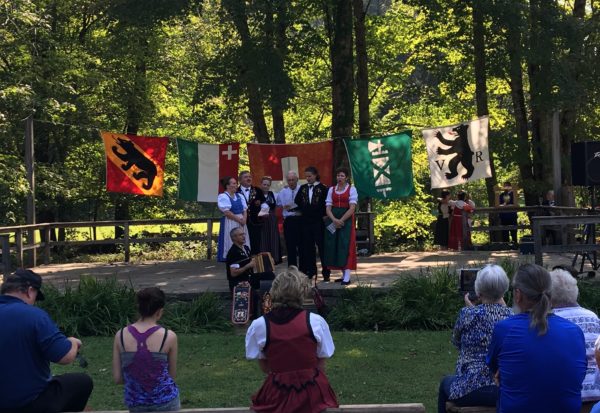 The Swiss Club delegation on stage

First I spoke with Peter Bürlimann. Though it was not his first time in Helvetia, it was his first trip back since he had been young. He said it was friendly there and felt like home. Something he was excited to see was that there was an interest in the youth of Helvetia in Swiss culture. This interest has been dying in the D.C. area recently. He then discussed the Swiss Club. The section that had came, the Folklore Group, was associated with the Swiss Embassy and there was a big push to get the club more active again. The group celebrates Swiss song, dance, and culture at numerous events in Washington. 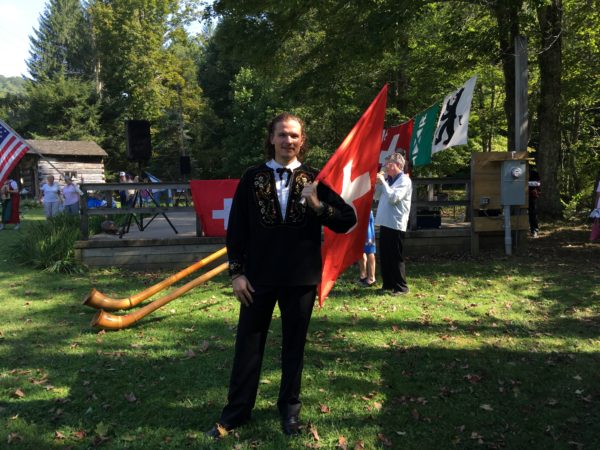 Peter with the Swiss flag 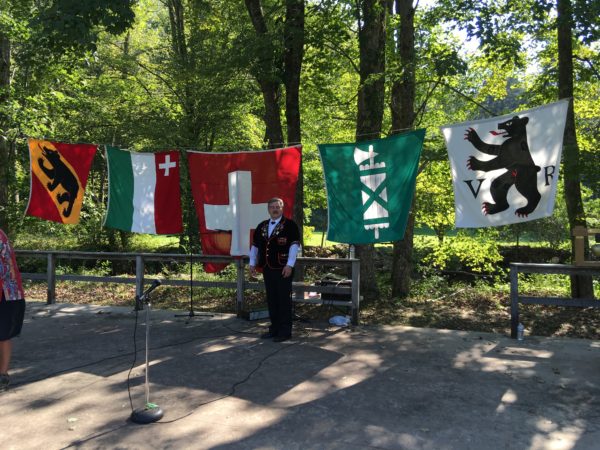 Next I spoke to Helvetia native Betty Daetwyler. She told me her family was Swiss on all sides, and her closest connection is her paternal grandmother who settled in Helvetia shortly after its founding. Of the fair she said that it “goes on and on,” but wished to see more exhibits entered next year. She also reminisced of the days when the fair had also featured animal exhibits and hopes that tradition makes a comeback. A final Helvetia fact she noted was that it is home to one of the first ramp suppers in West Virginia!

Finally, I spoke to Mr. Haudenschild. He told me the meaning and history of his last name which is an old Swiss name meaning “beats the shield.” Traditionally, his family were weapon makers. Haudenschid then told me more about the Swiss Club, which has has numerous subgroups including the Folklore Group that came this weekend, a shooting group, and also the Benevolence Society. With a laugh he said that he was involved with essentially all of the groups. He then described the scholarships he had discussed on stage earlier, saying that approximately $1,000-$2,000 was awarded to applicants for college. To apply all students have to do is visit the Swiss Club website, find the Benevolence Society link, and when the application is up state what they intend to do with the award. He said it was his first time in Helvetia since the group had reached out around six years ago, but he hopes to come back because “contact is important” between the groups of Swiss. 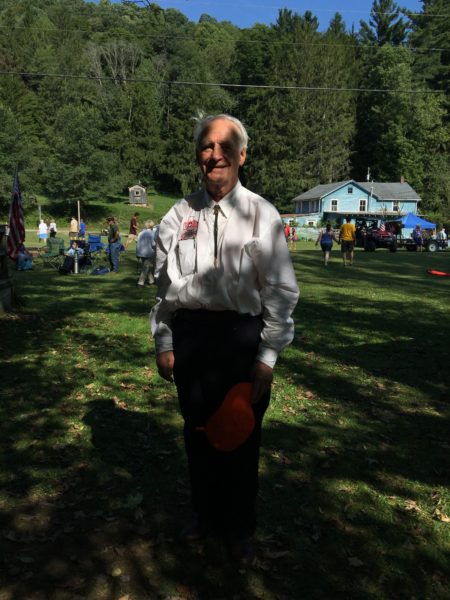 As day moved to evening the community hall was in full swing with a square dance. Many had stuck around after the program in the field in order to dance the night away until Fasnacht calls them back to Helvetia for the next celebration. 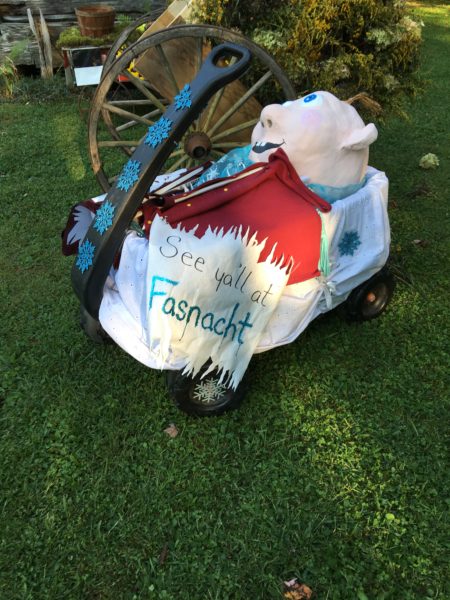