Today I spent a fascinating afternoon at the Beverly Heritage Days celebration to experience the “Centuries of History” as presented by the Beverly Heritage Center. I spent several hours this afternoon visiting with re-enactors that represent people from as early as the mid-18th century clear up to World War II, listening to stories about their times and why they choose to re-enact.

My first stop was at the Subscription School where I spoke with Annie Fleming who is spending her first summer with the Beverly Heritage Center. She provided a brief overview of the festivities of the weekend, stating the periods represented covered from 1750-1950 and how history affected the lives of the citizens of Beverly in these time periods. 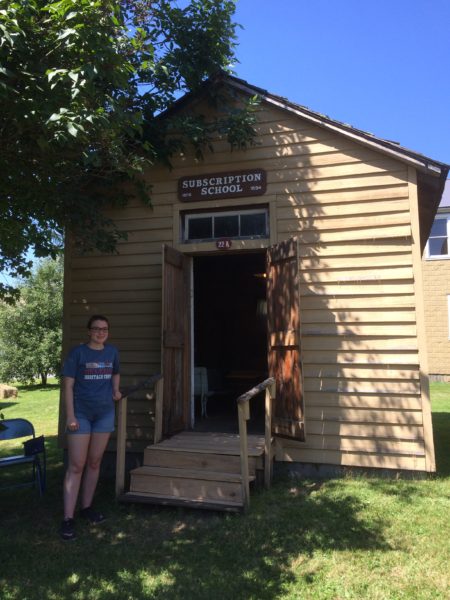 Annie and the School

She described the building as having been originally located between Dailey and Mill Creek, and it was called a “Subscription School” due to the fact that students paid to attend and this payment funded the upkeep of the school while also providing the salary of the teacher. When students were unable to pay to attend the school would simply close.

My next stop was at the pioneer camp where I spoke to Joan Pitts, a Beverly resident who has been re-enacting the 18th century for approximately thirty years. She spoke to me about cooking techniques and described some of the food she was preparing in the style of the time. This food included chicken on a string, stuffed chicken that is suspended on a string above a fire and twisted every so often. She said that it was essentially an early rotisserie. 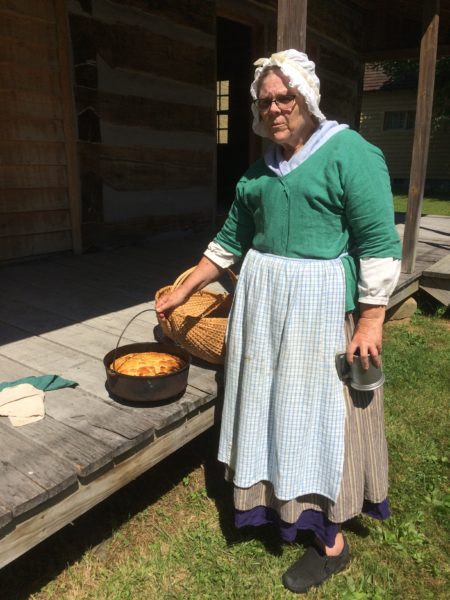 Joan and the Apricot Pudding

Joan went on to describe the food pictured above, apricot pudding in a crust, which was cooked in an early form of an oven that involved the cast iron pot being covered in hot coals to bake the pudding. She noted that many of the recipes during this time have been interpreted as the original meaning behind some of the instructions has been lost, including what it meant to bruise an apricot.

After meeting Joan I ran into a revolutionary war soldier named David Ervin, a volunteer re-enactor at Pricketts Fort. He loves spending his time re-enacting because “people read history and don’t understand they were people just like us who dressed a little differently.” 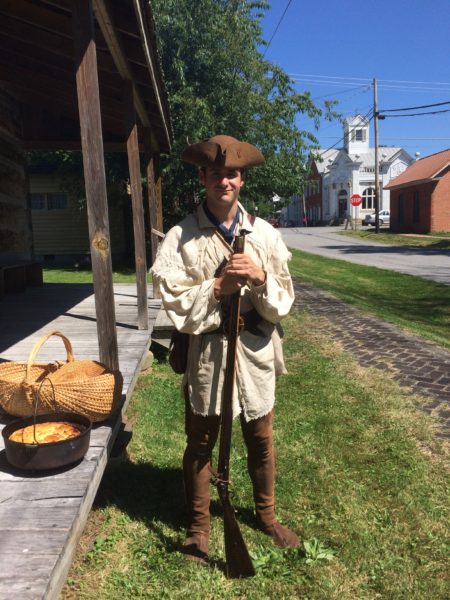 My next stop was with Jack Hasselaar who was representing the French and Indian War. He introduced himself as living in 1758, and stated he doubts he will make it to 1759. As forty year re-enactor he loves telling local stories and spends a measurable amount of time preparing for an event so that he knows the area he will be in because he likes all his stories to be true. 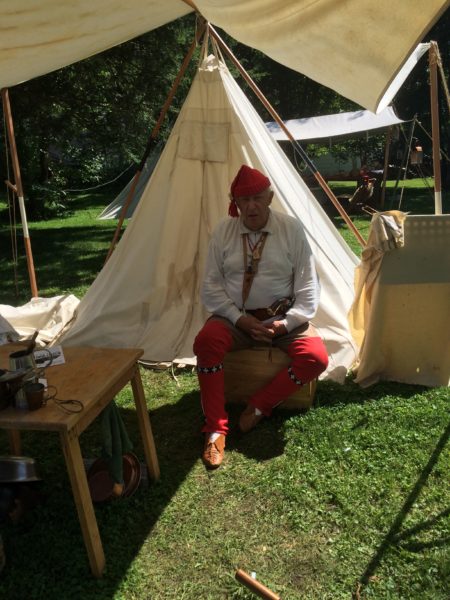 Jack seated at his tent

After speaking with Jack I joined Joe Brooks at his tent. Joe has been re-enacting for approximately thirty years and depicts a trapper from the mid-18th century. He described the life of a typical trapper. Beaver pelts were the primary source of income as they bought the most returns, and once a year the trappers of the region would rendezvous at a predetermined location in order to sell their catches for the year and buy/trade for necessary goods. These included gunpowder, lead, knives, clothing, and cloth to trade with natives for pelts they had collected. 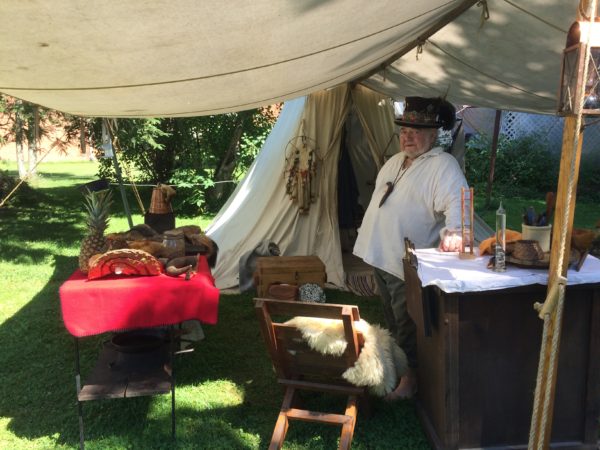 Joe at his tent surrounded by possessions that a trapper would have had access to, but might not have always owned

After this meeting, they would head back into the wilderness to continue trapping. Winters would be spent with friendly natives who taught the trappers and settlers alike how to survive without the conveniences found on the East Coast. 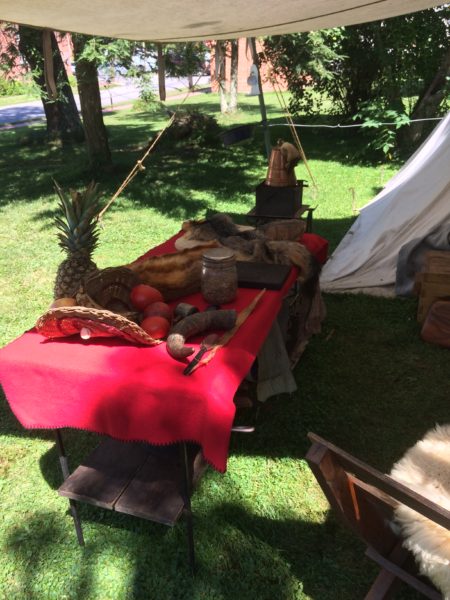 Joe and some of the furs he had with him

He ended our conversation by telling me that the pelts were typically sent to England to make beaver pelt top hats which is where the term “mad as a hatter” came from. Arsenic was used to cure the pelts in the felting process, and after spending day after day inhaling it many hatters went mad.

I next spoke to Bob Dickinson and Steve Hart who re-enact 1750-90. Hart has deep connection to the Beverly area, dating as far back as 1794 and is also a descendent of John Hart of New Jersey, a signer of the Declaration of Independence. At one point a series of gunshots were heard in the distance and Steve looked up for a moment before stating “there goes the Germans again.” He re-enacts because of his love for children and stated “if we don’t teach them our history they aren’t going to understand the present.” 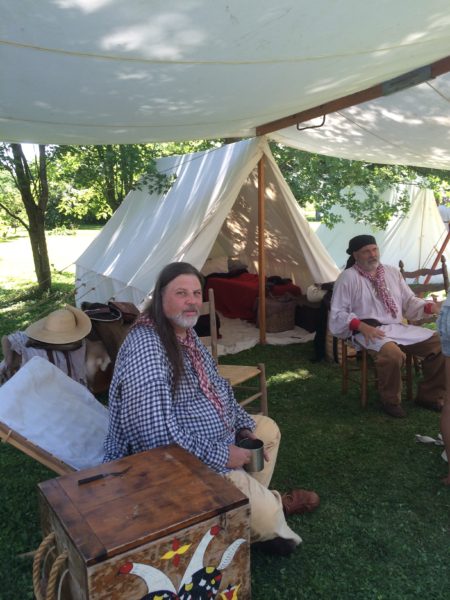 Steve Hart and Bob Dickinson at their tent

After speaking with him I met Karl and Sue Mulac who have spent the past thirty years re-enacting and moved to the area approximately eight years ago from Chicago. They enjoy telling stories from the frontier and are immensely passionate about history and bringing it to people that share their love. Karl stated that it is important to know where this land came from and said “we (the people of Randolph County) have stayed together through trial and tribulation and hold strong together” and what initially drew them here was this sense of community. 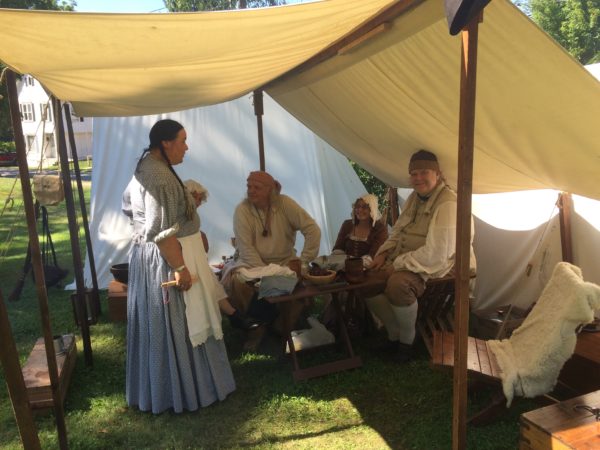 In the same tent Louis Painted Pony said he loves living history and teaching it to children. He  went on to say “If we don’t teach them (children) now, how are they going to learn our history, our real history?”

It was here that I also encountered “Big” John H. and Stormy Brasuck, members of the Lenni-Lenape tribe, who were re-enacting Civil War medics this weekend. The couple also represent Native American culture. I spent quite some time with them while they spun me wonderful tales of the Civil War and their culture. Big John explained that his unit, the 1st Virginia Cavalry , were wearing Richmond Depot Type 1 jackets that were more elaborate and had been issued early in the war. The pair also noted that many members of the 1st VA came from Jefferson County, Virginia (modern West Virginia), and that much of the history of the Civil War is far more complex than most history books tend to make it. As a result of such, John and Stormy re-enact to bring to life some of the complexities. Today Stormy represented the Chief of Native Scouts, and when she re-enacts as a Native American is a medicine woman. She explained that John’s haircut represents a peacetime Lenape style. 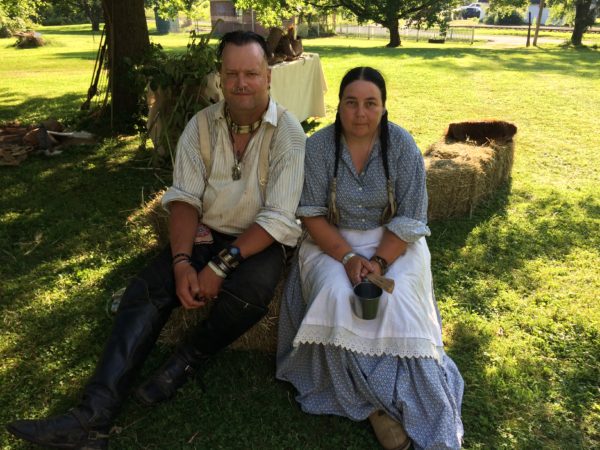 Mary McCaleb and I stepped aside while she described more traditional foods including apple pie baked in Dutch ovens, deer ham roasted over an open flame, and fresh vegetables that would be prepared in various ways. She said it was the average American food.

Nearby was Diane Anestis, a twenty-five year re-enactor that enjoys emphasizing early cultural exchange through foods and medicinal plants. She believes that it is important for people to realize that history isn’t just battles, it is about people living, interacting, an exchanging ideas using foods and medicines necessary for basic human life. Diane also said that the hunter-gatherer traditions of the past still resonate in Appalachian culture, and these skills were some of the first early settlers learned as most had no clue how to actually hunt. These were valuable skills that were picked up from the natives. 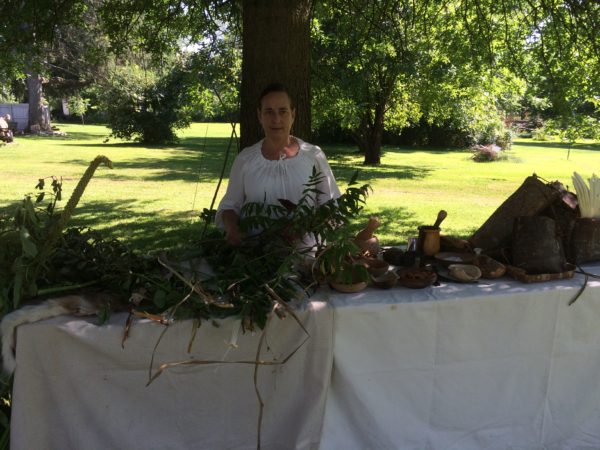 After leaving the pioneer camp I headed out to find the World War II camps, and it wasn’t too long before I stumbled into a German soldier named Barend de Müller who has been re-enacting for fifteen years. He told me he loves to re-enact because it brings to life what we read in books and see on TV. It gives people an opportunity to see, touch, and even smell what often seems to be so far off from our lives, and also provides people of all ages a different angle to look at history from. 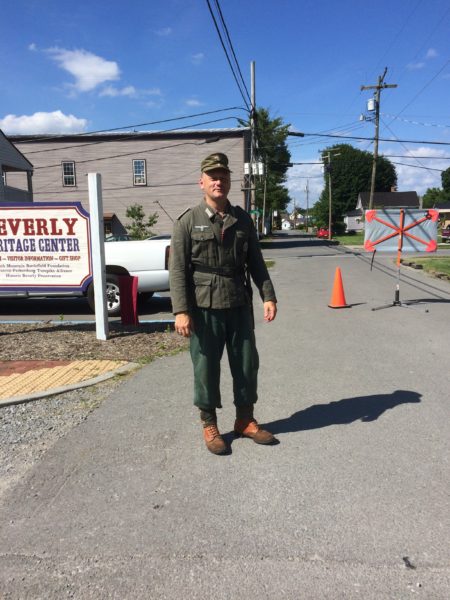 Barend in front of the Beverly Heritage Center

I continued down the road to the actual camps and first met Linda Barnes, a Soviet re-enactor who has been portraying a medic in the 193rd Rifle Division for the past three years while her husband has been involved for thirty. While the pair are not former military, they have an intense interest in history and especially Russian history and culture. She went on to say that many don’t realize that without the Russians World War II might have been very different, and it is important to remember all aspects of the time. 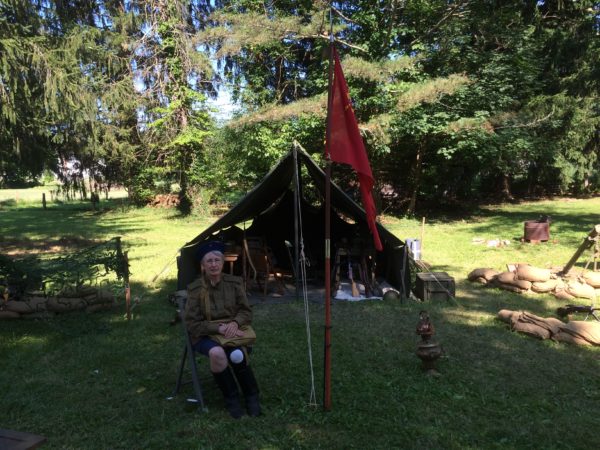 Linda at the Soviet camp

Next door were Daniel Evans and Bill Burruss who represented an American sailor and soldier from the same time. Daniel has been re-enacting for approximately twenty five years and originally fell into re-enactments via his love for military vehicles. Originally he would take the vehicles he had collected to events and was eventually told to grab a uniform and join in. He used to participate in actual re-enactments of battles that included combat and shooting at others dressed at Germans with blank rounds, but has generally moved to parades and camps. They are members of K Company of the 28th Infantry Division that was originally actively involved in the Battle of the Bulge, but occasionally they represent members of the 59th Coastal Artillery that served in the Philippines, too. 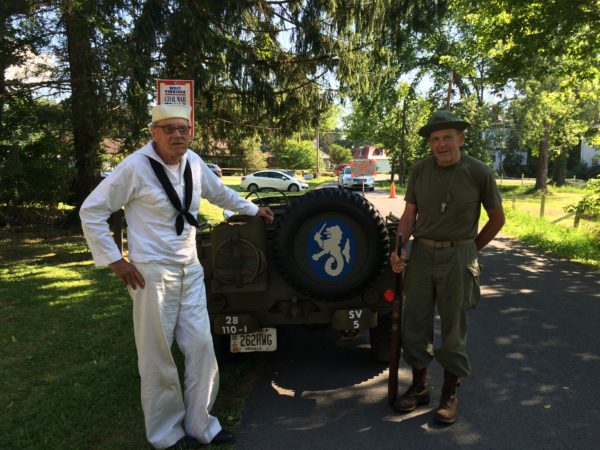 Across the road was the German camp. There I met Curtis Gould of the 24th Infantry Division that primarily served on the Eastern Front. He has been re-enacting for two years and was drawn into the hobby by a friend. He has always had an interest in World War II history and this is an interesting way to play out that interest. He hopes that in the future a battle re-enactment in Beverly may be possible. 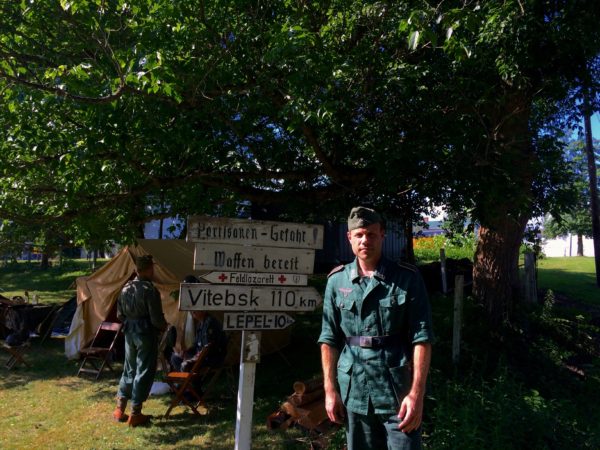 Curtis in front of a German signpost

A group of German re-enactors in front of their tent

Finally, I made my way to the Civil War camp where I encountered Johnny Emmons, Bill Summers, and Chris Swiger. Johnny and Bill have been re-enacting for approximately fifty years and Chris for less. The trio agreed that the reason they re-enact is to celebrate history and tell people about where we came from. For Johnny it is also a way to pay homage to his forefathers. 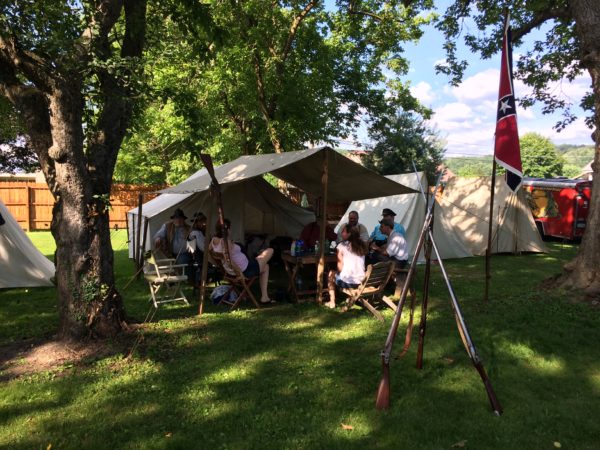 A section of the Civil War camp 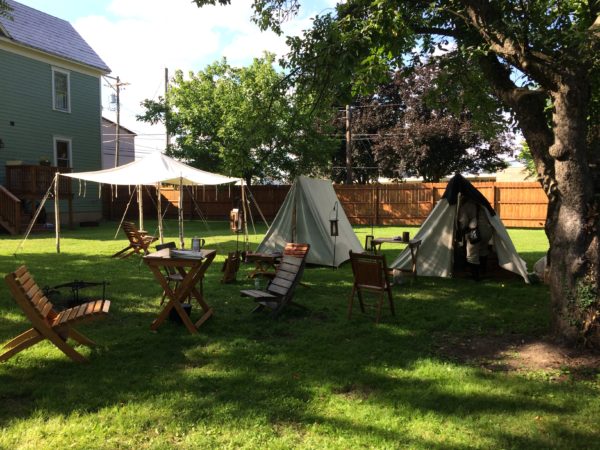 Another section of the camp 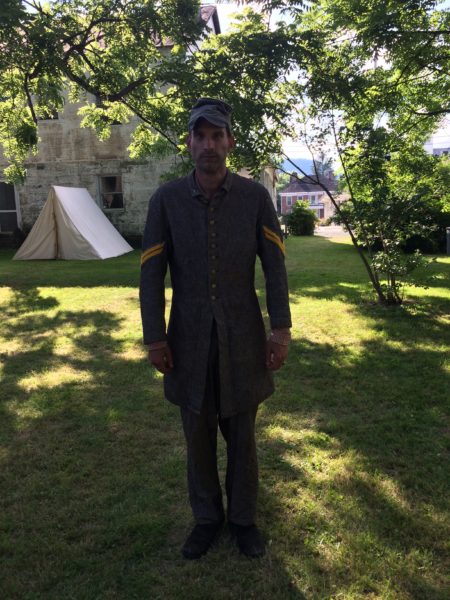 Also with the Civil War camp was Mark Poling who also participates in re-enactments because of his heritage and love for state and family history. His great great grandfather was a member of the 31st Virginia Regiment from Barbour County. He had three brothers that also fought in the war, two were killed in action and the third survived the war. On the other side of his family were soldiers that had fought with the Union Army.

It was here that I also encountered Tyler and Makenna Seelback, locals who were there enjoying the history and their day out. Makenna was particularly proud of a duck she had made from cattails and before I left gave me a high five. 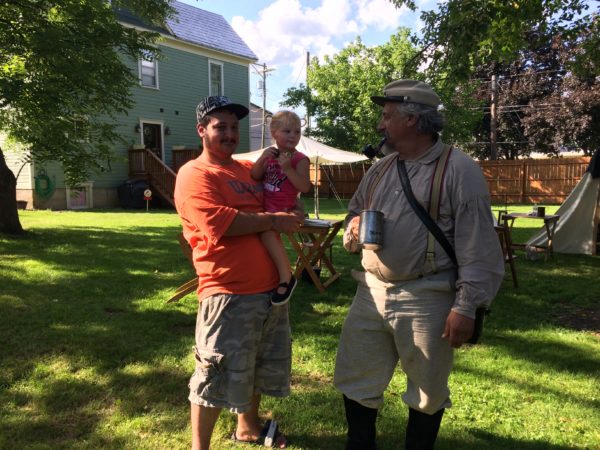 A common theme that I noticed among the re-enactors I encountered was a love for history and educating others. All were eager to discuss why they re-enacted, the history of their time period, and the importance of doing what they do. With each camp I visited I was met with warm welcomes and kind words.