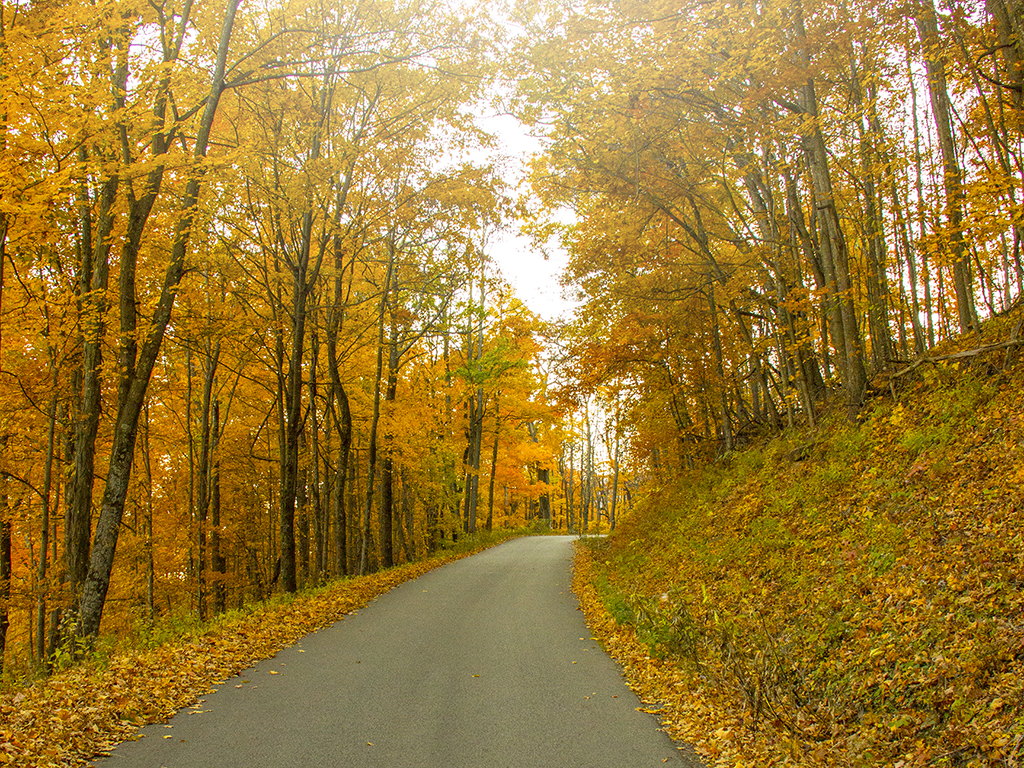 Soon comes the eve whose dawn shall be autumn
Where the woodland sheds all, to be raked and forgotten
With damp leaf puddles on each road and lawn
Summer’s lush livery too soon will be gone

Gray and grotesque is the coarse flesh of bark
A lichen clings tightly, and the moss becomes stark
Chilled winds circle tightly, sweeping left, brushing right
And cry as they caress every eave in the night

Crisp crunching of footsteps upon the tree’s color guard
Pounced upon by little children in great heaps in the yard
Slowly pummeling each particle back into the earth
Or placed in black bags, to line the street with their girth

Or perhaps burned en masse in an October pyre
The unmistakable scent of maple, ash, oak, and fire
Surrounded by people, staring at flashes of gold
As it crackles and sparks, the season tightens its hold

A family of jack-o-lanterns guards the front porch
Lighting the steps for masked ghouls, and orcs
Every last candy corn now has been spent
We put on our scarves as the last leaf descends

Every avenue lamp shines upon branches bare
Those nude, quiet structures tower shamelessly there
Until the time of spring, when their garb reemerges
And the unrelenting snowfall ceases its surges

Again we will understand the tree’s not met her end
As we take comfort indoors, where hot tea is our friend
But in spring we will see leaves repopulate the boughs
The woodland shall live then, just as it lives now
Aaron P. Kittle ©2015

Aaron P. Kittle is an Elkins native – a 1999 graduate of Elkins High School and a 2004 graduate of West Virginia Wesleyan College. Always creatively involved in music, art and design, Kittle began his interest in poetry while writing lyrics for various local bands in which he performed, starting in 1996. Kittle cites his grandmother, Beth Guye Kittle as a source of mentoring and encouragement, having published poems in countless magazines and two of her own volumes: The Sanctioned Fruit (1998) and A Widow’s Lament (2015). Since his start, Kittle has written over 200 poems and lyrics. Of Elkins, Kittle says, “Elkins has a very unique spirit that’s partly embedded in the people, and partly embedded in the surrounding mountains. If you embrace it, it embraces you. This place is unlike anywhere else. Here in West Virginia, worshipping God simply requires stepping outside. Growing up, people always talk about leaving West Virginia and Elkins behind…that’s something you find everywhere, but Elkins is the kind of home one always longs for. I’ll always be an Elkinite.” Kittle is employed as marketing director at Jenkins Subaru-Hyundai in Bridgeport, where he lives with his wife, Jessica.