It greets you as soon as you step outside: while you close your eyes with the first breath outdoors, the rich earthy scent of moss covered soil mixes with the dewy smell of recent rains to fill your lungs with crisp air; songbirds flutter from tree to tree as they happily chirp in the new found warmth; your boots sink into the damp grass as the world seems to be teeming with life again; you open your eyes to find…the brown, barren, leafless landscapes of mid-December.

Despite the barren hardwood forests on the outskirts of Elkins, we knew that we could seek at least some greenery among the still-verdant evergreens that thrive in the Otter Creek Wilderness. As we made our way down the winding gravel road to the parking lot not far from the trailhead, the thick evergreen rhododendron already gave the illusion of spring- as long as we didn’t look above the tops of the splayed green leaves to the barren canopy above. The trail began in a dry, flat section of forest and wound its way back to the creek. There, several tiny waterfalls cascaded through the creek bed. After stopping to admire them, we continued to follow the blue blazed trees. 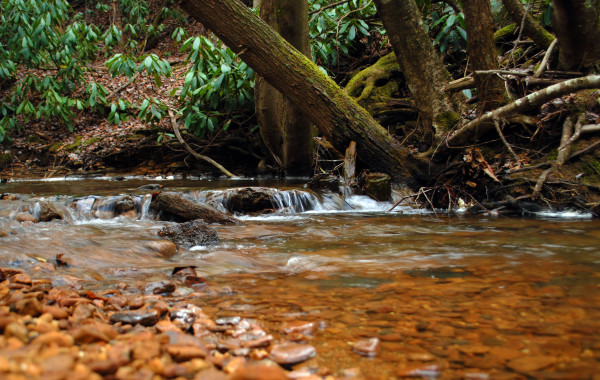 Shortly after leaving the babbling brook, we encountered our first challenge on the trail. Beavers had been very busy with constructing a dam just downstream from what would normally be a casual small bridge stream crossing. The constructed bridge was a few inches underwater and a some logs had been placed over the still pool instead. 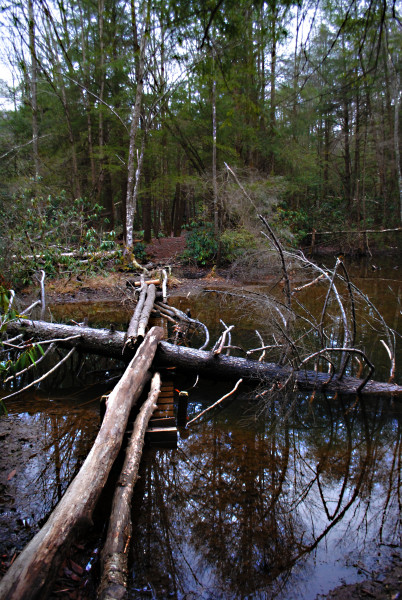 Given that we each had cellphones and I had my camera, crossing the log seemed a daunting task. On either side of the sunken bridge, the soft mud bottom of the pool seemed to be at least a few feet deep. Thankfully, I was wearing waterproof boots, so I as able to slosh across on the sunken bridge and use the log for the rest of the trip across; however, Ariel was not as lucky and was not wearing waterproof shoes. After deciding to skip crossing barefoot, she had to get a little more creative with her approach to the crossing- which involved a lot of crawling, scooting, and shuffling. 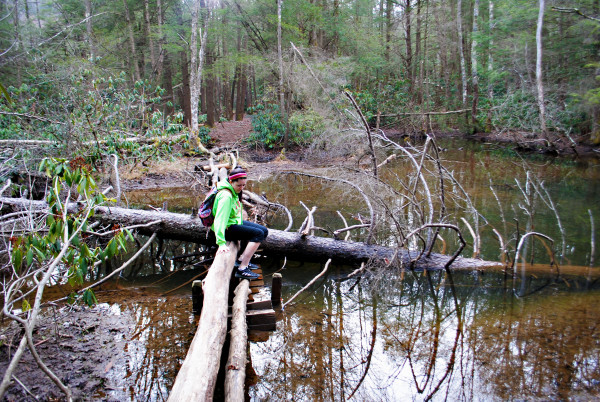 After crossing the rolling death tra- I mean, natural rustic log bridge, the trail continued on through the forest with relatively little trouble. Ravens were calling to each other in the distance as songbirds fluttered overhead. Eastern Hemlocks, Red Spruce, various mosses, and Rhododendron still carried their lush green colors throughout the trail. Often, we stopped to take in the amazingly spring-like smells and warmth. 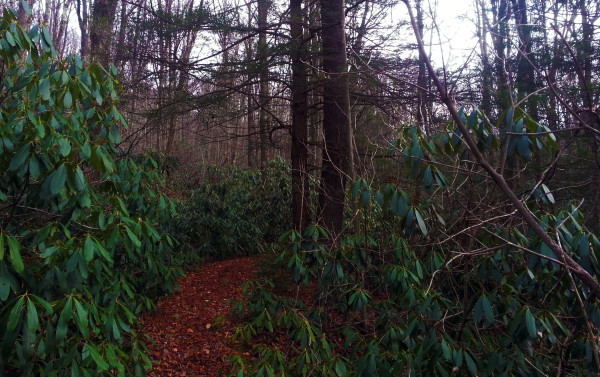 The trail itself was either incredibly dry or overly saturated with no happy medium. Most “mud-luscious and puddle-wonderful” areas had a few stepping stones and took a little creative maneuvering to avoid a boot full of squishy, gritty, smelly forest mud. Despite the abundance of spongy ground, no animal tracks were left along the trail. 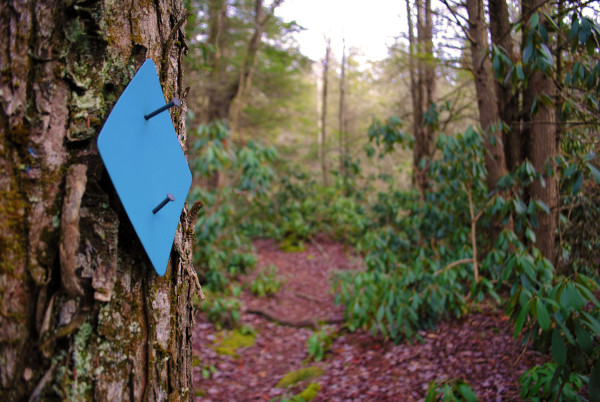 Sparse blue blazes guided the way, though the trail was well-worn and free of fallen trees or other obstructions. As we continued through the trails, we were greeted once again by the sound of a babbling brook. Upon hearing the sounds, the age old question was asked – is that just a babbling brook or a tiny waterfall? Of course, we couldn’t leave this question unanswered and made our way to the banks of the creek. 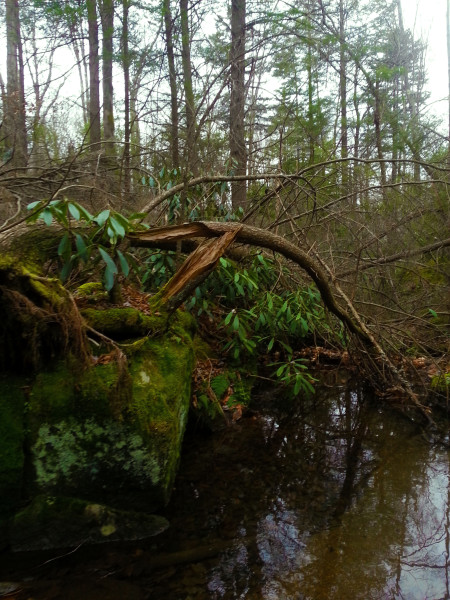 The creek was a few feet below the bank that we could see, so we set off carefully to find out what was just out of sight- and of course, immediately became tangled up in strands of greenbrier. Somehow, all that our quest yielded was a nearly still pool surrounded by several mossy boulders – no waterfalls or babbling streams in sight. A few small fish darted back and forth in the otherwise calm pond. After accepting the lack of waterfalls, we returned to the trail and continued winding through the lush moss, plump mushrooms, and abounding evergreens. A few minutes later, we heard what sounded like another small waterfall, but were wary of disappointment again after the last potential waterfall. Curiosity overcame hesitancy and we made our way down the bank yet again. 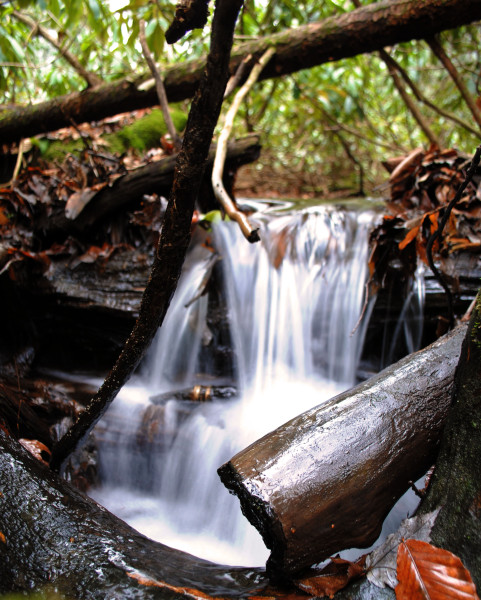 This time, we were greeted by not one, not two, but three small, cascading waterfalls. Each of these were only around a foot tall, though they each created surprisingly deep pools. After admiring the triplet waterfalls, we realized that the daylight was waning and made the decision to begin heading back. The trail itself was much of the same- extremely dry stretches, leading to super saturated areas, back into dry areas. We still had plenty of daylight left as we reached  the treacherous log bridge, so we decided to check out the beaver dam up close before crossing the bridge again. 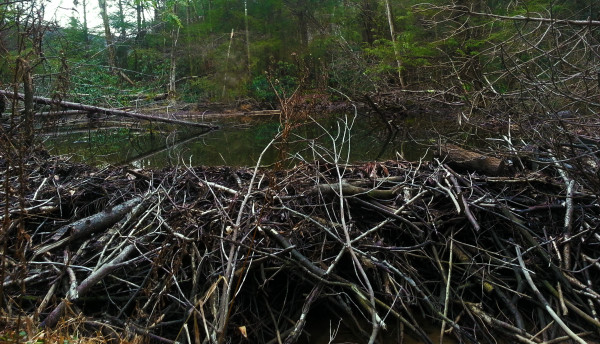 As we were admiring the architecture and large amount of work that had gone into the beaver dam- and, of course, making plenty of dam puns- we noticed that the forest had grown eerily quiet. Not even the ravens were calling in the distance. We chalked it up to the forest falling silent due to the approaching dusk and decided to get over the bridge before darkness started to fall. Ariel made her way across first, utilizing crawling instead of scooting and shuffling this time. She made it to the the other side and as I was putting my camera in a waterproof bag, the hair on the back of my neck stood up.

The unmistakable foreboding sound of a coyote’s call came echoing through the valley. We could tell that it was none too close, but definitely not too far away. I hurriedly shoved my camera in my backpack and began crawling across the log- which had, somehow, seemed like a faster way to cross in my adrenaline fueled state. As soon as I began crossing the logs, another call pierced the silence of the forest in reply to the initial noise. My only thought as I tried to hurriedly cross the log bridge was just how vulnerable I was in that position. 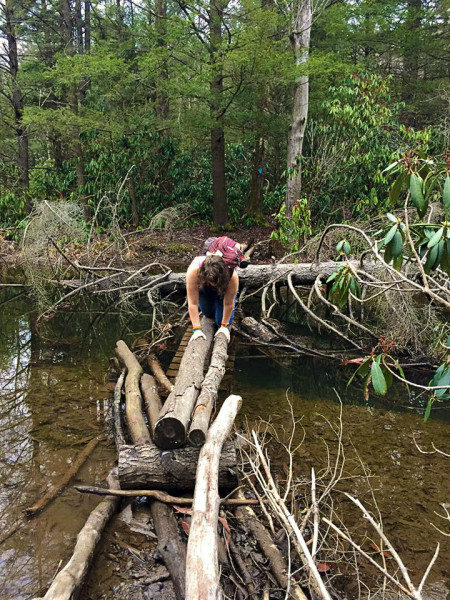 A third call came not long after, much closer this time. We couldn’t hear the rustling of leaves but knew that the coyotes were getting closer; though it seemed unlikely, we were unsure if we were in the way of their hunt or if it was just a coincidence that they were rapidly approaching- either way, we didn’t want to stick around to find out. A fourth call resonated through the forest as we hastily headed for the open area near the trailhead. The haunting howls and the following answers continued in what seemed like all directions until we finally made it to the gravel covered forest road near the trailhead. We continued on to the now-empty parking lot and stood near the car, listening. As suddenly as they had started, the bone-chilling howls and screams seemed to stop, though the rest of the forest was still eerily quiet.

As we drove out of the wilderness area and back into the barren brown landscape, darkness began to fell as we excitedly reflected upon our near-encounter with the swift moving canines. Though taking photographs of the coyotes would have been tremendous, we were relieved that we had not met them face-to-face; the near encounter made for enough of an exciting end to a warm December hike. 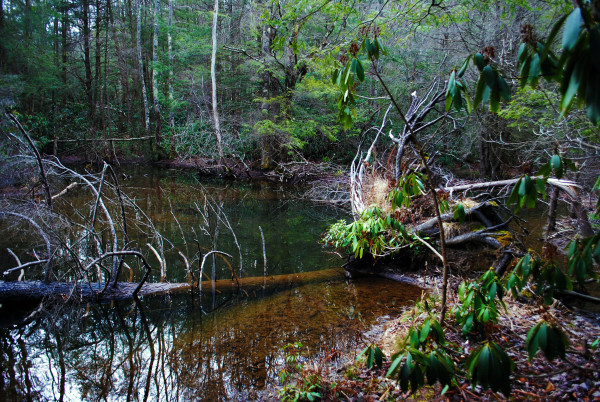