There’s no doubt that Rich Mountain is full of history, but few may know that atop sits a steel structure about 60’ high that was once an airway beacon for pilots. In the 1920’s and 1930’s radio navigation for aircrafts was unheard of and instead many pilots, especially those carrying air mail at night, relied upon these lighted beacons. Most beacons at that time were bonfires lit by local farmers, until electricity was introduced and the towers were constructed like the one on Rich Mountain. Approximately 1,500 rotating light beacons were operational by 1933 under the National Airways Beacon System. Much like light houses notified a sailor that land was nearby, these airway beacons indicated to pilots that they were on the right path or approaching an airfield.

As technology advanced and satellites were introduced, these lighted beacons became a part of history. There are only seven beacons remaining in the United States today. Four of which are operational and are located in Montana, the other dormant beacons are in Long Island, Washington and right here in Randolph County atop Rich Mountain. Currently the Rich Mountain airway beacon is not operational due to maintenance requirements, but the Elkins-Randolph County Airport Authority has been striving to persuade the Federal Aviation Administration (FAA) to make repairs. It is owned by the FAA and is in the facility’s directory listing. In 2009, the FAA declared that they would be decommissioning the Rich Mountain beacon tower and tearing it down as they have done with the majority of towers in the United States. Letters were immediately written in protest from community members and even from the offices of Robert C. Byrd and Shelley Moore Capito.

The alternative in tearing down this piece of history is to transfer the responsibility over to the Airport Authority allowing the residents of Randolph County to maintain and preserve it as a historic landmark. In December of 2014 a group of residents were represented at an Elkins-Randolph Airport Authority board meeting, indicating that they would be willing to maintain the tower beacon in order to preserve the historic value it provides Randolph County. 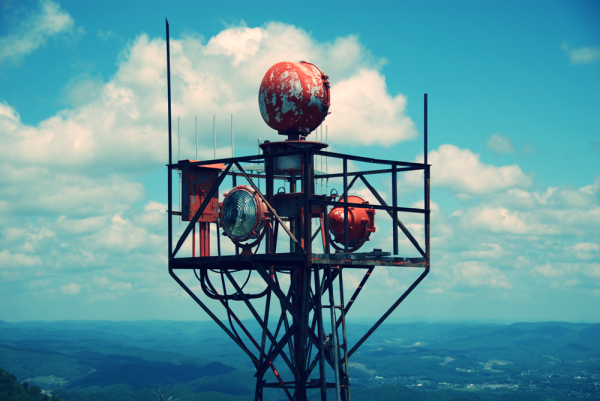 One beacon in Montana was decommissioned then donated to a small town where residents came together in a community effort to preserve its place in history. The reconstructed beacon now serves as a unique reminder of the city’s history but is also used by pilots traveling through the mountainous region. The last decommissioned beacon in the United States was in 1972 and can be seen on display at the Smithsonian National Air and Space Museum in Washington.

On a clear night the Rich Mountain airway beacon could be seen as far as Charlottesville, Virginia. In inclement weather conditions such as fog, icing and low ceilings being able to see the beacon atop Rich Mountain would provide a safety belt and reassurance to pilots that advanced technology just cannot replicate. “Being able to see a landmark at night 30 miles up the road is invaluable,” said Harold Dramstad, a Montana freelance pilot. In addition to being used as a navigational tool toward the airfield in Elkins, the beacon atop Rich Mountain used to inform pilots that they were either approaching or leaving the Appalachian Mountain Range, according to Dick Chaney, Elkins-Randolph County Airport Manager. This is a visual reference that pilots used for better communication and flight planning.

For more information or to get involved to help support the maintenance and restoration of the Rich Mountain airway beacon, please contact Chaney at 304.636.2726.