He’s a vagabond, after all, and that is why Matt Welsch had to follow the urge to jump on his motorcycle last week to ride down the country roads of West Virginia. 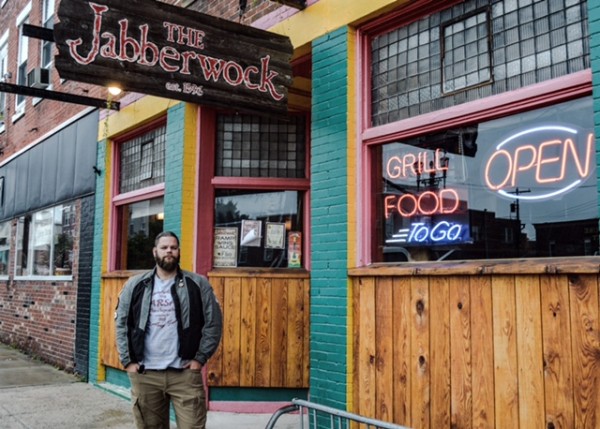 Matt Welsch, owner of the Vagabond Kitchen in Wheeling, made a stop in Elkins during his recent tour of West Virginia.

I caught up with this Vagabond Chef in Elkins, W.Va., and we visited The Jabberwock Bar & Grill together last Saturday afternoon. The Jabberwock, owned by Joe Isabell and new partner Bill Heckel, offers a limited menu, but all Welsch needed was one of the establishment’s well-known cheeseburgers.

“Our menu isn’t that big, but we do what we do the right way, and everyone seems to appreciate that,” said Isabell, a native of Cleveland who opened The Jabberwock in 1996. “This kind of business is pretty simple. They want the drinks to be cold, the food to be hot, and for there not to be any trouble when they are here. We accomplish all of that every day we open that front door.”

Welsch gobbled the burger, served with provolone cheese, tomato, and a friend egg on a Rudi Roll bun.

“That burger may have saved my life, actually,” said Welsch, who made his way to the Randolph County city in a driving rain. “It was a rough day. I actually had to pull over for a little while to let the hard stuff fall without me in the middle of it.

“But The Jabberwock is the kind of place I tried to find during my entire trip because of how those owners go about their business,” he said. “When I have done these trips in the past, I have always looked for places where I can learn things from the owners and the staff members that I can take back to the Vagabond Kitchen so we all can become better at what we’re doing in Wheeling.” 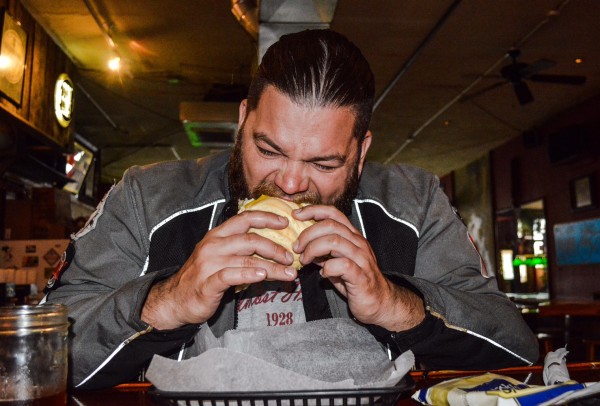 Welsch enjoyed his Jabberwock cheeseburger, complete with a fried eggs and the Rudi Roll bun.

Isabell said he enjoyed meeting Welsch, and he admired his effort to travel around the state to educate himself and to promote his Wheeling-based business.

“From the sounds of his trip, it probably would have made for a very good TV show,” he said. “I know the next time I am in the Wheeling area, I plan to look him up and visit his restaurant because it sounds as if he’s trying something new. Not everyone has the guts to do that in the restaurant business.

“What’s even more amazing is that he’s doing what he’s doing without being able to serve beer and wine, but he told me about his upcoming move, and that sounds like it’s going to be a big positive for the future of his business.”

Isabell has plans to make a few changes he will soon orchestrate concerning the future operation of The Jabberwock, including expanding the establishment’s hours of operation and doubling the number of available beers.

“When you bring in a partner it, allows you to do some new things to make the business better,” Isabell explained. “So our customers will see a few minor changes take place, and our ears are always open to good suggestions. 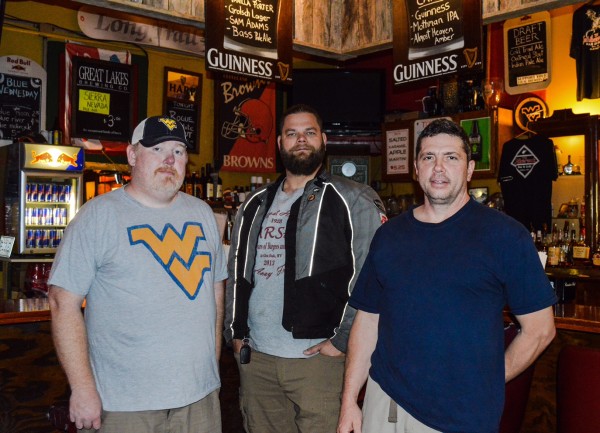 Wheeling’s Vagabond Chef met up with the owners of The Jabberwock Bar & Grill. Bill Heckel is on the left, and Joe Isabell is on the right.

“We may begin offering some daily specials for lunch and dinner, but I think it’s important to keep our daily menu the same so we can continue concentrating on five or six items so we can do those items very well,” he continued. “But I think our customers will enjoy having many more craft brews and other beers from outside the area on the beverage menu.”

The Jabberwock Bar & Grill now opens at 4 p.m. daily and will be busy with live entertainment during the first week of the 79th Annual Mountain State Forest Festival, a two-week event that attracts visitors from throughout West Virginia. The entertain schedule is as follows: On Oct. 1, The Davisson Brothers Band will perform at 9 p.m. – midnight); on Oct.2, the Miss Freddye’s Blues Band is scheduled for 9 p.m. – 1 a.m.; and 80’s Enough is scheduled for Oct. 3 from 9 p.m. until 1 a.m.

Welsch’s Mountain State trek served a few purposes, he explained, one of which included his recent Kickstarter campaign that will assist him and his wife, Katie, with the restaurant’s upcoming move to upper Market Street near the nearly renovated Market Plaza.

“A part of the mission was to get the word out about the Kickstarter campaign, but the primary reason I went on this trip was because I’ve always wanted to explore my own state,” Welsch explained. “I wanted to immerse myself into the culture of West Virginia, and I believe it’s safe to say that I accomplished that goal. 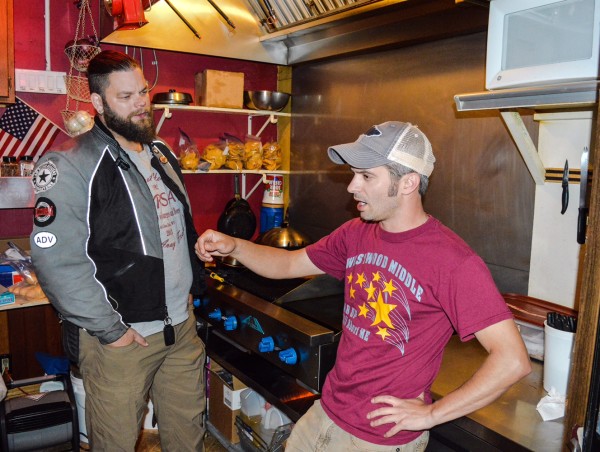 “Our state has so many gorgeous places, and the people everywhere were just so nice to me. They wanted to hear my story, and they wanted someone to listen to their stories, too,” he continued. “The trip made me even prouder to be a West Virginian. Thinking about everything that I saw and experienced always brings me to the verge of tears because of the beauty that I experienced every mile along the way.”

He also returned to the Friendly City with a plethora of new ideas for the Vagabond Kitchen, and for several other aspects involved with today’s Wheeling.

“I’ve always looked at Wheeling as a leader in our state, but I also saw a lot of things we do not have here, but I think they would work very well here,” the Vagabond Chef said. “I returned home with food ideas with ideas that are connected with the arts, and I also came home with a lot of thoughts about how we can beautify our city based on what I have seen other communities achieve.

“And I was asked a lot of questions about the progress we have had here in Wheeling because trust me, people from all over West Virginia are paying attention to what we are doing here,” Welsch continued. “They want to know how we have brought people of all generations together to work together. That seems to be an issue in some areas, so I explained to them that it’s about respect and open ears no matter who may be offering their ideas. It’s about working together.”