There is a new author in town writing under the penname of Joseph Lane. The author Joseph Lane Shipp, is a native of Randolph County, who moved away to work in the Washington, D.C. area. He has recently returned. Countless memories of growing up in Elkins have found their way into his novel “The Placed Green.” 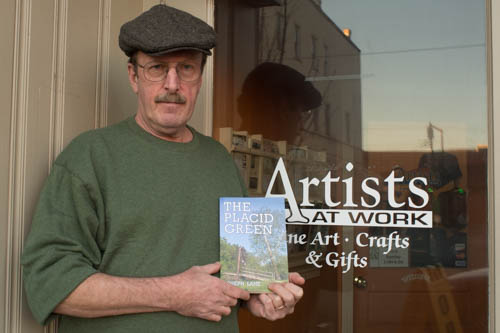 Author Joseph Lane outside of Artist at Work in downtown Elkins. His novel was juried into their gallery.

The title of the novel refers to the waters of the Tygart Valley River. It serves as the backdrop for much of the action. Set in the old neighborhood around Chestnut Street. The novel follows the adventures of a young man – P’found – over the course of a summertime. During this short time he and his friends find adventure, first love and much more.

The novel captures the innocence, playfulness and the perils of youth without compromising the wisdom and insight that growing up can bring. Lane creates a vivid reality for his characters to occupy. He artfully works to evoke the reader’s senses to bring them into the world of his novel.

The Landscape Of The Novel

This excerpt comes from the first chapter of the novel and demonstrates how Lane manages to capture the landscape of the novel in the midst of the ordinary task of waking to prepare for the day to come.

“With his last thoughts of yesterday and the goals for today now firmly in his mind, he quickly finished dressing. Just as he had done every morning so far back as he could remember, he scrambled to the south facing bedroom window. Looking outward from the second story window, he could see that the streets below and far beyond were wrapped in the ever-so common dense river valley fog. The clouds had come to Earth. Upon the ground, they rested like a silent , peaceful nighttime flannel blanket.

Not so far away he could see the finely crushed green and gray tar papered roofs. These were the homes of many of his friends and home to some of the older ones that he did not yet know. Yellow and greenish gray wisps of smoke curled slowly upward and away from crudely constructed short red brick spires. The lazy smoke struggled to climb a mere three hundred feet into the air. From time to time, the pungent smell of burning sulfur laden coals caused and odd, yet pleasant stinging sensation in his nostrils. But, this was all proof that many had built a fire to take away the cool edge of the night.

In the distance , not so far away, the tops of the old tannery buildings could be seen rising above the dense layer of clinging fog. Their long red-lead painted single story wood structures dominated the landscape . Reaching out from the main two story and three story cluster of center buildings, the long hide processing buildings reached out like long boney fingers. Now abandoned, they were once the cowhide tanning and leather plant that was so named, The Kessler Leather Company. It’s now crumbling remains were only memories to the hard labor and toiling voices of long departed workmen. The structures were nearly, completely lost and overgrown to all but for the favor of the neighborhood children.”

In another opening scene, Lane introduces one of the story’s more interesting and mysterious characters. The Hobo.

“The old man snapped his fingers with joy and swiftly replied, “Well then just walk along with me a short while. Walk up this street that you call Chestnut. Wye, grant me just a little time and I will tell you a story.” Reaching as high as his shaky arms and crooked, wrinkled fingers could point, the old man gestured skyward. He exclaimed, “See where it begins? It begins somewhere up there in those clouds!”

The young lad strained and gazed anxiously upward. His mind tingled with anticipation.

Looking down to the young man’s expectant, delightful face, he posed a simple but yet most grand question, “What is life but the breath of ever day?” 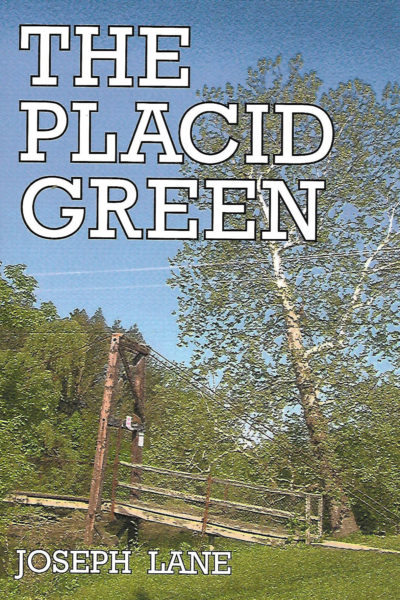 The title of his novel refers the Tygart Valley River.

The novel started as thoughts during his commute. “For 21 years, I used to commute 56 miles one way into and out of Washington., D.C. I always kept a pen and paper with me. Basically, what I ended up with was this big pile of about 100-150 scraps of paper, pieces of the puzzle. I’m thinking, I can use this in chapter 3 or maybe in chapter 4. So, when I finally got enough of it put together, I assembled it as pieces of a puzzle and then filled in the blanks.

Lane says he viewed writing a novel like one would view climbing a mountain. It was something that was possible, a challenge to face.

As Lane crafted the novel he found joy in putting the pieces of the novel together. But, he was worried bringing the characters to life. However, once he got there the characters seemed to come alive.

“For the first couple of chapters I thought how am I ever going to give these characters any depth? What will I have them say? I found that when the story came to that point, they just began to speak for themselves, to have the personality and texture of each player.”

Lane describes the novel as a “Moral fantasy.” Over the course of the novel, the underlying values of friendship, love, respect for others, overcoming one’s fears and selflessness are encountered. Rather than being didactic, the novel elevates the experiences of youth in such a way that all people can begin to consider the things that bring us all together to create a better world. Lane says that he would like for people to take away the lesson that you take a page from life on how to conduct your self.

This is most clearly evident as P’found and his love interest Feather face down the death of an influential character in their lives. With his last words he reminds them to live a life that they would like to be remembered by. This concept is central to the theme of the novel.

By approaching these questions of existence and living it through the eyes of a young man on the edge of adulthood, the reader is reminded that one of the greatest potentials of youth is the ability to create an adulthood worth living.

Where Get The Novel

Lane’s novel has been juried into the Artists at Work Gallery in Elkins. Signed copies of the book are available in the Gallery. The gallery is also home to many other talented, fellow artists, and craftsmen of the region.

The book is also locally available at The Railroad Gift Shoppe. Major book retailers nationwide, amazon.com, and on e-book for NOOK users.