A week-long celebration of Davis & Elkins College, March 26-30, will lead up to the inauguration of the College’s 15th President Chris A. Wood. The events, all free and open to the public, showcase D&E’s spiritual life, arts, athletics and academics.

“This is the season of inaugurations and Davis & Elkins College is excited to be celebrating a ceremony of our own as Chris Wood is formally installed as the 15th president,” said June Myles, chair of the Board of Trustees. “As West Virginians, Chris and his wife, Lisa, appreciate the importance and value of an educated populace. Our mission, ‘to prepare and inspire students for success and for thoughtful engagement in the world,’ is in good hands. We look forward to years of continued growth as President Wood leads this 1904 institution forward.” 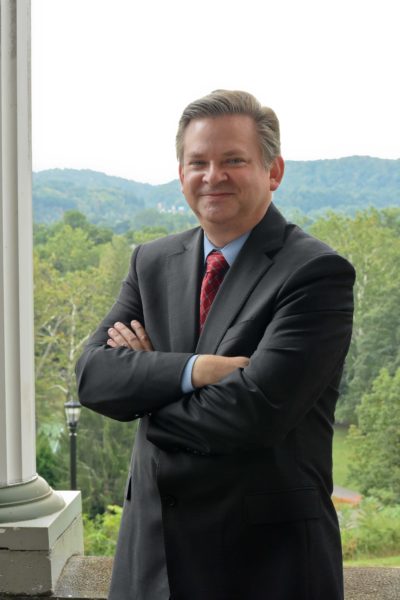 A native of Huntington, W.Va., Wood was named to D&E’s presidency in June and assumed the duties on August 1. Wood, his wife, Lisa, and their two daughters, Lacey and Lexi, along with their miniature schnauzer puppies reside at Hearthstone.

As an ordained United Methodist pastor, Wood began his career serving congregations in Illinois and Maryland from 1986 to 2000. He returned to West Virginia in 2000 to serve for six years as program and executive director of Mission West Virginia Inc., an innovative and nationally recognized statewide non-profit organization that works to build capacity for community and faith-based organizations.

Wood has chosen “The Journey” as the inaugural theme based on the signature phrase of his father, the late Rev. Dr. F. Emerson Wood. The theme also is one Wood says will weave through the events designed to celebrate D&E during inauguration week.

Each day also is dubbed with a subtheme. Events begin with Celebrate D&E’s Community Service and Worship on Sunday, March 26 when a community service project will take place beginning at 7 p.m. in Myles Center for the Arts and a campus worship service will follow at 8 p.m. in Robbins Memorial Chapel.

Monday, March 27 is designated as Celebrate D&E’s Athletics. Davis & Elkins College alumnus and former Trustee Hank Steinbrecher, ’71, will be the featured speaker for the 7 p.m. ceremony in Myles Center for the Arts. As Secretary General of the U.S. Soccer Federation from 1990-2000, Steinbrecher was instrumental in bringing soccer to prominence in the United States and oversaw the staging of two of the most successful Men’s and Women’s World Cups in the United States. At Davis & Elkins, he was a member of the College’s 1970 NAIA national championship soccer team and is a founding member of Friends of Senator Soccer.

Celebrate D&E’s Academics will take place on Wednesday, March 29 with a public reading by West Virginia Poet Laureate Marc Harshman at 7 p.m. in Myles Center for the Arts. Harshman was appointed by Gov. Earl Ray Tomblin in 2012 as the state’s seventh Poet Laureate in recognition of his work for both poetry and children’s literature.

Various events of celebration fill Inauguration Day, Thursday, March 30, beginning with a lecture by alumnus and Trustee David Morrison, ’79, at 11 a.m. in Robbins Memorial Chapel. The dedication of the Morrison-Novakovic Center for Faith and Public Policy, located adjacent to the Gatehouse, will follow at noon.

The Center, named for Morrison, and his wife, Phebe Novakovic, opened in fall 2016 and provides an open space where students, faculty, visiting scholars and others can explore issues of faith, and social and public policy beyond what they learn in the classroom. Eight students who reside in the Center and one freshman assist with the leadership under the guidance of Dr. Bryan Wagoner, assistant professor of philosophy and religious studies who serves as director of the Center, and Benefield-Vick Chaplain the Rev. Kevin Starcher.

Morrison and Novakovic served as underwriters for rehabilitation of the 75-year-old structure, formerly known as the Gross House, acquired for the College by Myles.

The official Inauguration Ceremony begins at 4:30 p.m. in Myles Center for the Arts Harper-McNeeley Auditorium. The West Virginia Highlanders of Davis & Elkins College will lead a procession of a host of dignitaries, including higher education representatives from throughout the region, Davis & Elkins College faculty and students.

Remarks will be presented by the higher education community, Davis & Elkins College Board of Trustees, alumni, West Virginia Presbytery, elected officials, students, faculty and staff. The ceremony will include musical selections and the official administration of the oath of office and presentation of the Presidential Medallion.

A reception will follow in Myles Center for the Arts.