Editors Note: This article is the first of two articles that recount the experiences of a group of Davis & Elkins College students and faculty who traveled to Cuba this past January as part of Sustainability Studies and Environmental Science courses. The second article contains over eighty photos of their travels and can be viewed here. The trip was part the college’s unique three week winter term. During winter term students are immersed in a single course that stresses experiential and participatory learning. Courses vary from staging an entire theatre production in three weeks to the colleges unique First-Year Symposium that works to engage students in our democracy. Winter term is also a great opportunity for students to travel. In recent years students have traveled to Nicaragua, Kenya, Peru, the Florida Everglades and Keys, and the Galapagos Islands. 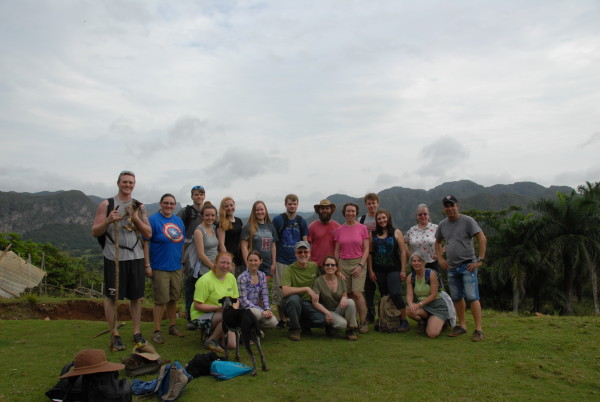 The group atop a mountain in Viñales. Photo by Diana Ross.

When myself and a group of 16 others from Davis and Elkins College first set out for Cuba early in January to study sustainability, environmental science, and biology I had absolutely no clue what to expect. All I assumed was the Cubans would have some sort of historic dislike for Americans and we would be treated as outsiders. To the contrary, I quickly learned that when Professor Russ McClain told us to check our assumptions at the door he was more than correct. I never expected the warm reception we received. The Cuban people were extremely welcoming and accommodating, and they were easily among the kindest people I have encountered abroad. They were quick to strike up conversations with total strangers. If they hadn’t been speaking Spanish most of the time I might have thought I had fallen into some forgotten city in West Virginia. In the stores and streets we were always asked where we were from, and their first guesses were always Canada and Germany. When we responded that we were neither, they thought it was almost a miracle to have Americans back in Cuba. One evening while exploring Old Havana a gentleman approached us and began guessing our place of origin. He listed all of the usual countries they are used to experiencing, and his final guess was a very surprised United States. Upon confirmation that we were indeed his northern neighbors he told us “Americans and Cubans are like brothers and sisters. We’re exactly alike.” That moment defined the rest of the trip for me. 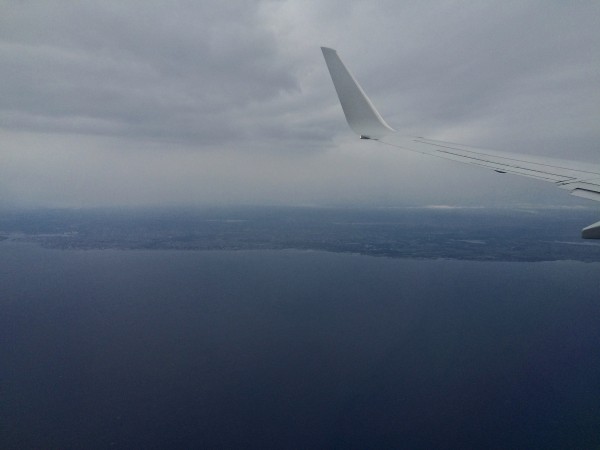 Our first glimpse of Cuba. Photo by Emily Coffman.

For a portion of our trip we stayed in casa particulares (rooms in homes that private citizens rent out, think in terms of a very personal bed and breakfast) in the small eastern town of Viñales. Our group was spread out over many houses and occupied almost an entire block. My cousin and I stayed with the Gomez family that consisted of the house father who had been an English teacher before retirement, the house mother (we never quite found out her outside profession), and their teenage daughter that was studying English whom we did not see often. While there we experienced the warmth of Cubans. They opened their home and their lives to us, and we were welcomed into their family. Each morning, the house mother made us delicious breakfasts over which we discussed everything under the sun. When we weren’t busy with whatever was scheduled for the day we were busy exploring the small town, sitting on one another’s porches, and meeting the occupants of each house. Our neighbors were a small family who had a son that turned three the day we arrived. The day after this my cousin, another student, and myself presented the young fellow with many gifts. Among these was a baseball that was a favorite as the little guy and his father love baseball. Although he was napping when we arrived to give them to him, he appreciated them nonetheless. The house mother for this house was busy giving some from the group Salsa dancing lessons. Elsewhere, there were some from the group playing with the house children. Life was slow and enjoyable. When there was nothing left to do we found ourselves sitting in rocking chairs on porches and watching life go by, as one would at home. 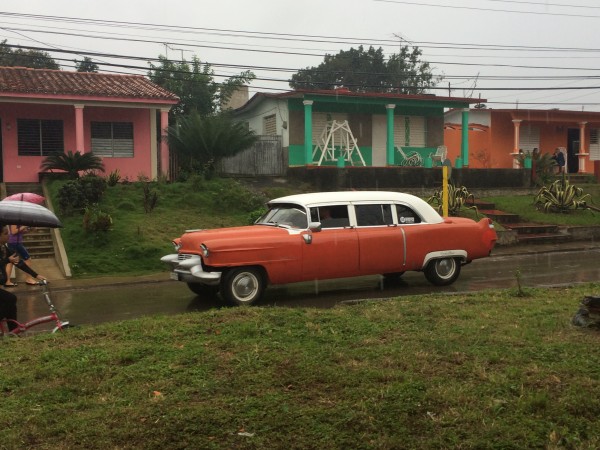 An older American car driving down the street we stayed on. Photo by Emily Coffman. 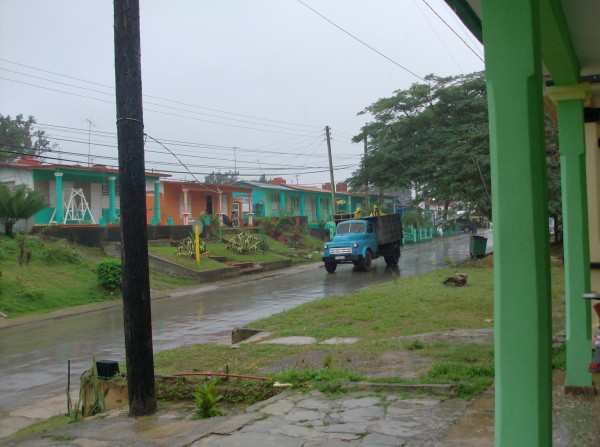 Another view of the street we stayed on. Photo by Brittany Bolinger.

Community is as important to Cubans as it is to us. They seek part of their identity in their homeplace. As we define ourselves as Americans, West Virginians, and Elkinites they define themselves by their homes and take pride in them. Time after time I encountered people that welcomed me to their town or city with the hope that I would enjoy my time both there and in Cuba. One of the most memorable instances of this occurred in a market in the town of Trinidad. A pleasant lady that spoke English very well that was working at one of the first stalls stopped my cousin and I, asked where we were from, and then asked “the Americans” if we would at the very least chat for a moment and glance around at her wares. She acted as though having the opportunity to just talk with us was an honor, and when it came time for us to move on she wished us a wonderful afternoon in the city and asked that when we returned home we remember her. 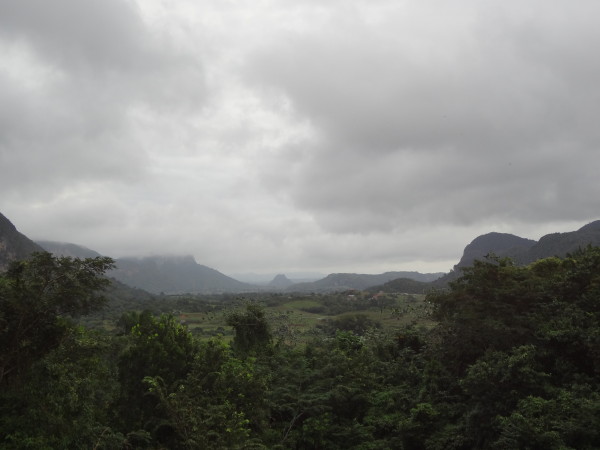 A mountain range in Viñales. Photo by Emily Coffman.

Another feature I noted of Cubans that I’ve also found to be true in West Virginia is a sense of resilience and independence. They have lived without certain commodities for years (such as new cars, or even parts for repair), but they have found ways to adapt and repair things that have no earthly reason to continue functioning. They have been cut off from their main external support systems numerous times, forced through an oil crisis without much aid from elsewhere, and almost everyone in the country holds two jobs just to make ends meet, yet they have foraged on. There is certain ingenuity to the solutions they have created so that they may live the most comfortable lives possible. Instead of giving up, the Cuban people have continued to carry on when most others would give up. West Virginians have a similar attitude. When times are tough for us, whether it be collectively or individually, we too carry on. Talk to most anyone in the state and you will hear stories of hardships and struggles, but those stories always end with why they fought through their difficulties in order to continue living life. When we are without, we too find ways to make what we have work. At the end of the day everything is alright. 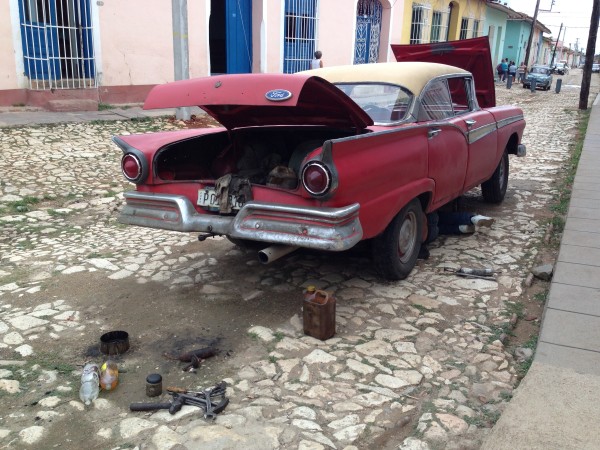 A Cuban man repairing his Ford from the 50s. Photo by Russ McClain.

However, at the end of the day there is still an embargo, we still have concerns with the Cuban state, and while relations are changing fast we will still remain strangers to one another for quite some time. With this aside though, I had a surprisingly wonderful experience in Cuba. I am still stunned at the warm reception we received. Thank you to the wonderful people of Cuba for welcoming a group of American students into your home and welcoming us back to a country we have so long forgotten. I cannot wait for the day I can return without a visa, and we can return to being friendly neighbors. 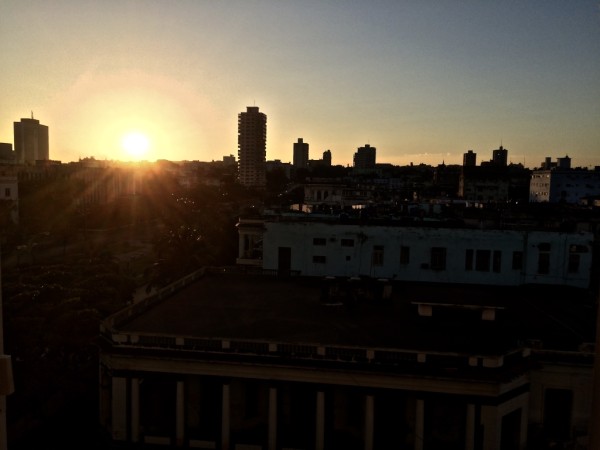 The sun setting over Havana. Photo by Emily Coffman.